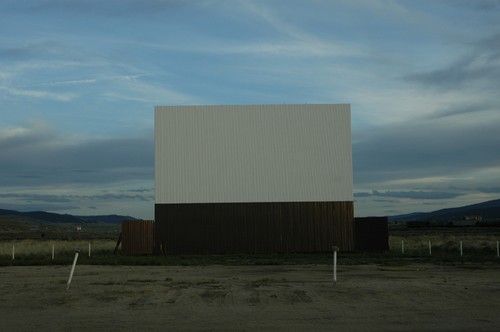 One of the few drive-ins that has a correct Google pin and icon. According to their website the second screen was enlarged in 2004 and the lot was expanded to approx 500 car capacity. There appears to be no street address as such but it is mapped on German Gulch Road and is described as being exit 119 off Interstate 15. Phone 406-782-8095 but closed for the 2011 season—looking forward to the 2012 opening. Info from their website.

There is also another twin drive-in located in Laurel, MT.

The Silver Bow is about 4 miles south of Butte on I-15. It used to be in Deer Lodge, but was moved because of a new highway coming in. It is family-oriented, no R rated films & they are single feature only. Reasonable prices, but cash only. I’ve been here twice now, it is a pleasant drive-in experience

According to Wikipedia (yeah, I know), Silver Bow is just a neighborhood in Butte. Considering that the theater lists its address as Butte, IMHO this listing needs to be moved under Butte.

The official web site says “The Silver Bow Drive-In has been family owned and operated by the Hansen Family since 1977 when it was first built with a single screen tower. A second screen was added in 1980 creating the first twin drive-in theater in Montana. Later in 2004 the second screen was rebuilt and expanded. Allowing for a total capacity of close to 500 cars.

“The concession stand and projection booth, built by Jens Hansen I, was originally part of a drive-in located near Deer Lodge, MT from 1949-1973. The building was moved to its present location in 1977 by the current owners.”

And we need to change that comment to almost no R-rated films. This weekend, they’re showing Snatched, an R-rated Mothers Day movie.

The only drive-in listed for Butte in the 1982 IMPA was the single-screen Motor Vu, capacity 500. (Ditto through 1988.) But the 1972 & 1976 IMPAs listed the Motor Vu with two other Butte-based drive-ins, so I’m guessing that they just overlooked the Silver Bow.