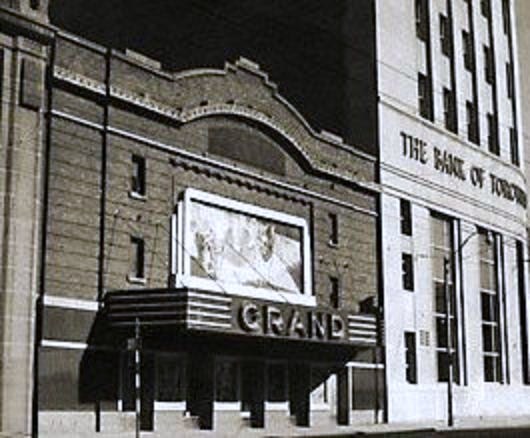 Opened about 1916 as the Province Theatre offering vaudeville and films. In 1917 a 3 manual 25 rank organ by C. Franklin Legge of Toronto was installed to accompany silent movies as well as additional entertainment for the patrons. It was equipped with a roll player mechanism in the event a regular organist was unavailable. The organ was removed in 1934 and sold to a local church where it remained until 1963.

The Province closed in 1937. The interior was remodeled in the art deco style and included a new marquee and signage outlined in neon to replace the original ‘Province’ lettering which had been outlined in individual bulbs on the building’s pediment. The theater was renamed the Rio, reopening in 1938. Sub run double features were the normal fare until it closed once again in 1950.

A further minor remodelling, mostly to the marquee and signage was carried out and it reopened in the same year with yet another (and final) name change to the Grand. It operated in it’s last years as a grind house leaning heavily on double and triple features consisting of westerns and ‘B’ movies. The Grand closed in 1961 and was demolished along with surrounding buildings to make way for a new high rise bank tower. Actually nothing sits on the theater space today. It is part of the bank tower plaza.