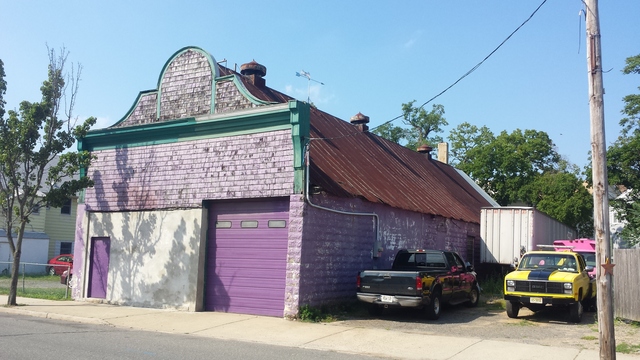 Very small movie theater in “downtown” Highlands, NJ which opened for the summer (during my time in the early-1960’s) when the shore population would increase with summer rentals.

A super librarian in NJ mailed a copy of an image of the theater from a book (not credited). It’s a grainy shot from 1939 when it was called Highlands Auditorium. It mentions that in 1940s & 1950s it was called the Marine and was managed in conjunction with the Atlantic in the next town. It does mention that “with a different facade, it exists as the Lusty Lobster at 88 Bay Avenue”.

She was also gracious to include a few copies of the theater listings from 1963. Fortunately, she hit on one of my memories.

It seems as if the theater may have been open on weekends only during the off season and changed programming on Tuesdays, Thursdays, Sunday with weekend matinees.

A mix of single features (newer releases like Hud, Nutty Professor), with some creative double features (Journey to the Center of the Earth & Time Machine). I remember seeing The Blob paired with War of the Worlds.

I have other programming, on these 6-7 pages,for the area theaters, Atlantic, Route 35 DI, Eatontown DI, Carlton, Eatontown DI , if interested email me.

are there any theaters left in jersey that just open in the summer?

I don’t know of any theaters anywhere, other than drive-ins, that are seasonal. I imagine that would be tough to do in this economy. Are there any in LI? I’m in Florida so even the drive-in is 52wks/year.
Jerry

The Cape Cinema, on Cape Cod, is seasonal. It is open only from mid-April through late October, according to their web site.

Also on Cape Cod, New Art Cinemas in Provincetown closes two of their three screens for the winter.

It wouldn’t surprise me to find such seasonal operations in other resort areas.

I wonder, Ron, if they are not-for-profit and subsidized some way. Or popcorn goes for $15. Jerry

The Frank Theatres chain appears to have two seasonal houses on the South Jersey shore: the Strand 5 in Ocean City (Cinema Treasures #7144) and the Beach 4 in Cape May (not yet listed).

According to the 1956 Yearbook of Motion Pictures, The Marine was part of the Brandt Theater chain and officially sat 540. Anyone know where the Brandt booking archives are kept????

One of the double features that I was able to re-trace was The List of Adrian Messenger one during the summer of 1963. Here’s the ad. jerry

This was still a Brandt theater in 1963, along with the Atlantic. Harry Brandt was president and general manager. Brandt operated theaters in ten states plus DC at the time. Most of the theaters were in NY or NJ.

i was biking thru the other day and saw a building in a marine green color that resembled a small movie theater. 600 would be pushing it. i’ll post from my mobile.