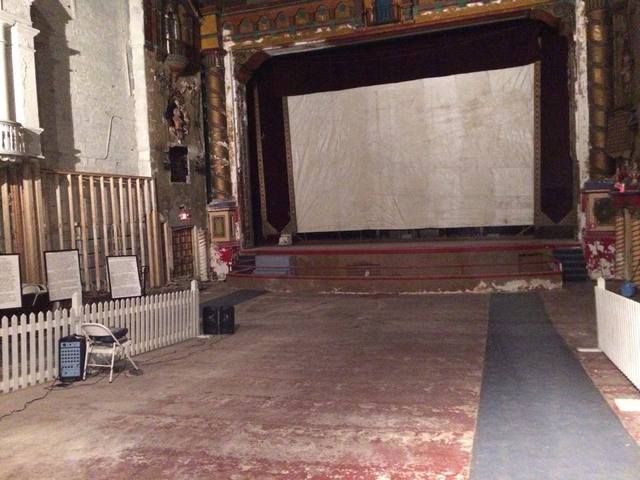 In 1929, Col. J.B. Russell decided that Maysville was in need a theatre and he was going to build it in this scenic Ohio River town. Russell, a local business man, raised $125,000 to build a minature movie palace for the relatively small town. The Russell Theatre opened on December 4, 1930, with Eddie Cantor in “Whoopee”.

Lexington based architectural firm Frankel & Curtis designed the theatre and interior designer Ralph Clevenger of Columbus, OH created a Mediterranean garden complete with ivy clad colonades, lombardy poplars, and literary busts set into wall niches. The theatre was also in an Atmospheric style with the usual twinkling stars and flying clouds. A rainbow would appear over the stage when a movie ended. The box office glistened with Rookwood tiles. The auditorium featured an orchestra pit in front of a curved stage where the dressing rooms were located beneath the stage and there was no stage-right only stage-left.

Russell ran the theater until 1935 when the Schine Group took over. In the early-1970’s, the Panther Group became managers of the theatre. It was during this time, an over-zealous manager painted over the original jewel tone colors with coats of red paint to, in his words, freshen the place up.

In 1983 the Russell Theatre closed with a screening of the James Bond movie “Octopussy”. In the years that followed, the Russell Theatre served the community as a restaurant, a used furniture store, a used clothing store, and finally a newspaper filler operation. Eventually, the building closed completely.

It was during this time a heavy wind and rain storm ripped off a section of the roof. This allowed a damaged interior gutter to drain into the theatre. Exposed to the elements for a long period, the sodden plaster of the west interior wall collapsed into the auditorium. Eventually, the wide, comfortable seats were sold off and used to help restore another theatre.

Since 1996, the building was bought by Save The Russell, a not-for-profit organization trying to restore the little palace near the Ohio River. It will take $2 million to $3.5 million to bring the house up to par.

The fund raising is a pet project of George Clooney’s father, Nick Clooney, newsman and former host of AMC as well as his aunt, the now departed singer Rosemary Clooney. The Clooneys' were born and raised in Maysville and Rosemary performed as a child at the theatre. She used to head up a music festival each year to help with the funding.

The Russell Theatre has been place on the National Register of Historic Places.

An article about the creation of a miniature model of this theater on display at the Kentucky Gateway Museum Center in Maysville: View link

Here’s a decent scan of a postcard from my collection, same as the cropped part above:
View link

We are working hard trying to raise money to restore the theatre. The auditorium is a big job. You can see more photos at: http://www.flickr.com/photos/juneybdesigns/sets/72157634165740078/ Like us on Facebook: www.facebook.com/RussellTheatre Follow us on twitter: www.twitter.com/Russell_Theatre

Fantastic job on restoration! Auditorium looks to be very similar to that of the Midwest Theater Auditorium of Oklahoma City. Design must have been by same architect, John Eberson…If you get the chance, check out the Auditorium Photo’s of the Midwest…It was demolished in 70’s….Best of Luck on your Restoration!

Check out the latest blog post on After the Final Curtain – The Russell Theatre!

Any pictures of the projection booth?