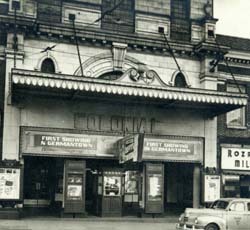 Located in the Germantown section of North Philadelphia. The Nixon’s Colonial Theatre was designed by Thomas W. Lamb and was built in 1913, opening December 28, 1913 with Keith vaudeville, headed by Fred Karno’s London Company presenting “A Night in an English Music Hall” and featuring (uncredited) Stan Laurel (Stanley Jefferson). Soon after opening movies were added to the program. In August 1923 it was taken over by Stanley-Warner and by the late-1920 stage shows were only occasionally presented. In 1930 the Colonial Theatre was remodeled by another famous architect, John Eberson. It was equipped with a 3 manual, 20 ranks Kimball organ. The Colonial Theatre was closed on January 22, 1953 with Sterling Hayden in “Flat Top” & Tom Conway in “Confidence Girl”. It was demolished in February 1953.

The Colonial Theatre, located at 5526 Germantown Avenue (near Germantown Avenue and Maplewood Avenue) was a large theatre built in 1913. Records show a seating capacity of 2,552, but press releases indicated that it had a seating capacity of over 3,000. As with the Orpheum and the Germantown, it was built as a vaudeville house with a deep stage for live shows and stage productions. It was built at a cost of $450,000, which was a huge sum at the time, and was described then as “one of the largest playhouses of its kind in the country”. From early press clippings, I gather that this was a very elaborate theatre. In its earliest days, it was known as the Nixon Colonial Theatre, in deference to other theatres that had the Colonial name.

As with the Orpheum, the Germantown and the Tulpehocken (later the Rialto), the Colonial’s early bills combined a program mix of vaudeville shows, films and stage productions. By the 1930s and 1940s, movies dominated the bill, but the Colonial and those other theatres were still used for special stage shows and big band shows as well.

The Colonial continued to show films until 1960, when it was demolished.

I found this in an old press clipping regarding the Colonial:

“…It is built of the colonial style of architecture. The interior is of gold and white decorations with massive chandeliers suspended by large chains. The ceiling is embellished with mural decorations.”

Doesn’t really say a whole lot about the Colonial in terms of oppulance. But, the Colonial would had to have been a very grand and elegant theatre, since it cost $450,000 to build. In comparison, the Walton was built 2 years later (1915) at a cost of $12,000. Still, without having seen the Colonial myself, my feeling is that it paled in comparison to the Orpheum, the “grande dame” of Germantown’s theatres.

Unless there was another Colonial in Germantown, the theater was already closed by 1952:
http://tinyurl.com/ygul7p

The Colonial was the largest of Germantown’s theatres. One of the unique things about this theatre was the use of ramps to get from one level to another, rather than stairways.

Here is a link to another postcard view of Germantown Avenue that provides a better vire of the rooftop sign that reads :Nixon’s Colonial Theatre"

The May 15, 1913, issue of Engineering News had this item about the Colonial Theater:

“The contract has been awarded to FLEISCHMAN BROTHERS & CO., New York, for the construction of Nixon-Nirdlinger-Loew Theater and hall at Germantown and Maplewood Aves.; the hall and lobby entrance to the theater will occupy the Germantown Ave. front, and the theater will stand on the rear of the lot. The entire lot is 75 ft. on Germantown Ave., with a depth of 240 ft., and a frontage of 125 ft. on Maplewood Ave. The estimated cost is $250,000. Thomas W. Lamb, Philadelphia, is Arch.”

Construction of the Nirdlinger-Nixon Colonial Theatre began late in 1912 and would be considered one of “The Big Three” in Germantown. The Colonial not only had great seat count but a grand stage that could hold any Hippodrome show. It was said to have been one of the handsomest theatres in the world at opening - likely a bit of an overstatement - yet its 3,000 seat capacity with inclined floors, Colonial Adam architecture and majestic.proscenium wowed folks with its vaudeville show at launch on December 28, 1913.

The theatre also featured photoplays as part of its regular offerings early on. It added sound to remain viable. The Stanley-Warner Theatre Circuit closed the Colonial Theatre at end of lease with “Flat Top” and “Confidence Girls” on January 22, 1953. A salvage sale offered the building for sale complete with steel, support lumber and bricks. It was definitely demolished in February of 1953.