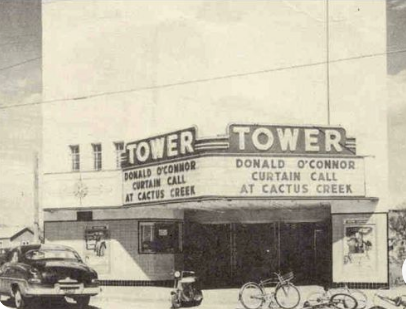 The Tower Theatre opened August 22, 1940 with Deanna Durbin in “It’s a Date”. It was located on University Avenue (College Avenue at the time of opening) and was owned by Lubbock Theatres, Inc. It was directly across from Texas Tech University. It was one of the many theatres that were located on or right off Broadway. The single screen Tower closed in 1964.

There are nice 1940 Grand Opening photos on below site. Type in word “plaza”, then hit search,
View link

Correction; to view Tower Theater 1940 photos, type in word “tower” on above site.

There is an opening day ad in this 1940 newspaper:
http://tinyurl.com/7yzylg

In the 1950s the Tower was a second-run theater, often showing double features. If you missed a movie at the Lindsey, State, Arnett-Benson, or the Village after usually only a one-week run, you could catch it at the Tower, and at reduced prices, too. Fifteen cents if you were under 12, which I was!

It was chosen for the opening road show engagement of West Side Story in Lubbock. Played there for many months.

The Tower Theatre opened with Deanna Durbin in “It’s A Date”, along with a sidewalk broadcast over KFYO-AM 790 (now 790 AM and 95.1 FM), a broadcast from stage of Bernie Howell at the Hammond, an introduction of guests of honor on the main stage, an unnamed short subject and a feature program.