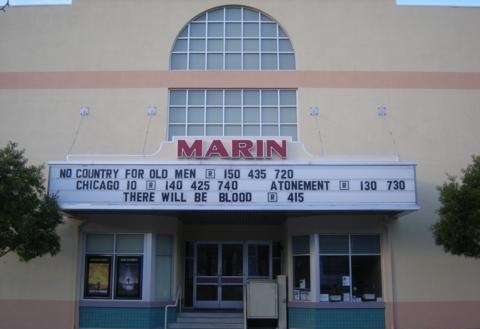 Built in 1909 as a livery stable. It was converted into a garage and had a hall upstairs. Opened by Blumenfeld Theatre Circuit in January 1943 as a single screen with a seating capacity of 604, it became a three screen operation showing independent and art house movies under the Century Theatre’s sub-heading of CineArts.

In 2009, it was operated by Cinemark. It was closed January 24, 2016. In 2017 plans were proposed to convert the first floor into two screens and a restaurant, and office space upstairs on the second floor.

The Marin Theater actually is only a three screen operation; each of the three could only qualify as “screening rooms” at best, as they barely have a capacity of more than 100 apiece.

The Marin actually dates to the 1920s. In an old photo taken from a plane, it shows as an ornamented facade typical of the period.

The first time I saw the Marin in the 1980s, it was still a single screen. The facade was painted brown and was completely plain. However the marquee was a rectangular canopy without reader boards, but with bands of neon and the name MARIN, in neon, centered on the marquee front.

The three screens now inside face sideways to the original axis of the auditorium.

The Marin Theater was the first Movie in Marin County to play Woodstock. I went to go and see Woodstock on the night it opened at the Marin. It was really cool because all of my friends were there too. We had a great time that night.

Theatre is actually a 3-screen.

Cinemark will be closing this theatre at the end of business Sunday January 24, 2016.

A couple of updates on the Marin Theatre…..

Within a year of closing, a plan to renovate the building was approved by the town’s Historical Landmark Board and planning commission which would allow for a restaurant and two theatres on the first floor and offices on the second. Work finally started in 2018.

The two theatres would seat respectively 75 and 50 and feature plush recliner seats, with one set up to accommodate live performances and lectures. The plan was to show first run and independent films.

Unfortunately, an article in the Marin Independent Journal this past January said that, while the office space is about finished, work on the theatres has been halted and is currently being “left as a cold shell”, until either they find someone who will show movies or they get the conditional-use permit changed. They are hoping to keep it a live entertainment venue but said that it wouldn’t be a movie theatre in the traditional sense.

Anybody interested in operating a 2 screen venue with a total of 125 seats here’s your opportunity, monthly rent is $26,996.00.

The Marin Theatre was built by the Blumenfeld Circuit and opened in January, 1943.

In 1942 the Mainship Shipyard had opened in town, building Liberty Ships and tankers for the war effort. Nearby Marin City was built to house many of the people who came from around the country to work there, and the Blumenfeld brothers found that their local venue, the 286 seat Gate Theatre, could not accommodate the increase in business. Restrictions on building brought on by the war left them unable to build from the ground up, so they purchased one of the larger buildings in town and remodeled the ground floor into the Marin Theatre.

The building was built in 1909, the ground floor was originally a livery stable and later a series of garages and other businesses that required a lot of open space. The second floor was a public hall which supposedly could hold 1800 people. Known originally as the Tamalpais Pavilion and later Langsam’s Hall, it was still operating well into the 1930s and would explain the ornamented façade Gary Parks saw in the 1920’s era photo taken from a plane.