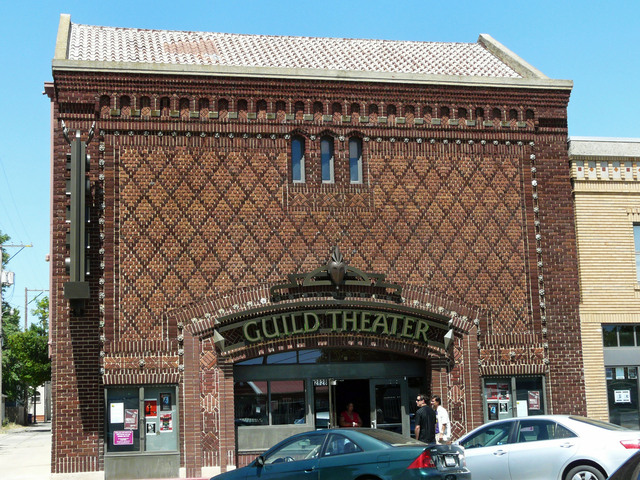 In 1915 it was re-designed (maybe even rebuilt), to the design of and financed by Joseph Lewis. It re-opened as the Victor Theater and remained as this until 1926 when it closed.

On August 14, 1952 it re-opened as the Guild Theater screening Moira Shearer in “Tales of Hoffmann”. A seating capacity now given as 467 and a new modern marquee had been installed over the entrance. On May 28, 1969 it went over to screening adult movies and was renamed New Guild Theater. After years of serving this downtown community it eventually closed and fell into a state of disrepair, remaining vacant for many years.

Re-opened in May 2003 (again named the Guild Theater) by the St. Hope Academy, a non-profit community developement organisation. It now has a mix of live shows, lectures and films in its newly re-furbished 200 seat auditorium.

Exterior photo prior to reopening (“X” out of the print menu):
View link

While a USAF Navigator trainee at Mather AFB in 1968 I went to the Guild several times. At that time it was a unit of the Art Theater Guild chain, for which I had worked while in college in Memphis, TN at the Guild and the Studio in Memphis (both q.v.) Eventually I introduced myself to the manager as a former ATG employee, and thereafter often got in for free. Saw Peter Cook and Dudley Moore in “Bedazzled,” a Brit modernization of the Faust tale, “with Raquel Welch as Lust” (beware of imitations); also Andy Warhol’s “The Chelsea Girls”—say WHAA'?? (And I thought Quantum Mechanics was incomprehensible….)

I have fond memories of Guild during the years I lived in Sacramento, roughly 1962-1968. It introduced me to the new world of independent American and foreign film. “Jules and Jim”, “Seven Samurai”, “La Dolce Vita”, “The Virgin Spring”, “David and Lisa”…I could name dozens more that I saw for the first time at the cozy little Guild, sort of the Sacramento equivalent of San Francisco’s legendary Surf. In particular I liked to attend on Monday nights when in addition to the regular feature they had a bonus feature, usually another legendary art film. The neighborhood got more dangerous and Art Theater Guild opened another art house, the Towne, in the Sacramento suburbs, out near American River College. That seemed to be the beginning of the end for the Guild. I remember some Los Angeles based porno chain taking over in the late 1960’s and then I lost track of it until it was briefly reopened by Matias Bombal in the 1990’s. Nice to see it still is being used as a theater, even if films are not being shown there anymore.

I always thought that it was located more downtown…

Started to show adult movies as the New Guild on May 28th, 1969. Another ad posted.

Adding a name. Motion Picture Herald, Aug. 23, 1952: “Anson Longtin is changing the name of his 467-seat Oak Park, Sacramento to the Guild and has inaugurated a foreign-pictures policy.”