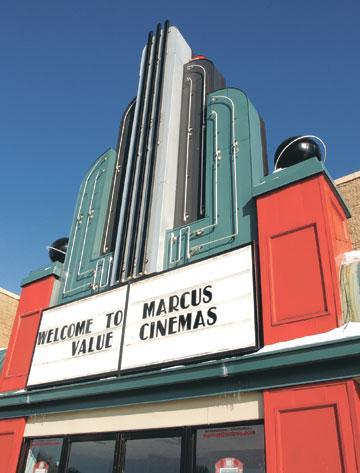 The Regency Mall I-VI Cinemas were original General Cinema shoebox style theatres. They started with six screens on January 30, 1983 and later increased to eight screens, some really tiny. Marcus runs it now along with the much better Westgate Theatre five-plex a few blocks away.

The fate of both theatres was in question when Marcus opened their new state of the art sixteen-plex, down the road, in Sturtevant in late-2005. In January 2009, Marcus Cinemas announced that the Regency Value Cinemas would close in April 2009. The Cinemas were demolished in July 2009.

Just my guess…Marcus likes to own their own land where their properties are. The Regency Mall Cinema land was not their’s. Plus, Marcus wants people going to their big investment, The Renaissance, in Sturtevant. Who can blame them? I feel bad the Regency Cinema is closing, but it was not a very good theatre.

Here View link is a hometown-paper article with a color photo of the Regency’s echo-Deco facade.

The movie screen had been torn down, the seats were empty and the ruins were real â€" the handiwork of a yellow Caterpillar 235C there on Monday to begin demolishing the theater at 5230 Durand Ave., which closed in mid-April. Azarian Wrecking was in charge of the demolition, expected to last two weeks.

Randy Jansen, 44, looked on with a camera around his neck. â€œIf Iâ€™d have known the seats were in there Iâ€™d have said â€˜Iâ€™ll buy a row,â€™â€ said Jansen, there to take pictures for his wife Melissa, who worked at the theater for 15 years.

Workers from Azarian Wrecking used a backhoe to tear down the former Regency Mall Cinema building on the Monday morning. of July 6, 2009. The theater, at 5230 Durand Avenue in Racine, Wisconsin, was Racine’s last operating movie theatre, and closed in April 2009 when Marcus Theaters Corp. decided not to renew the lease.

Jansen arrived at around 8:45 a.m., and planned to watch until he had to leave for work at around 3:30 p.m. Three other spectators joined Jansen in an otherwise empty parking lot Monday morning.

Jansenâ€™s pictures will add to the coupleâ€™s Regency collection from over the years, including from when his wifeâ€™s then-young daughter ripped tickets for a bring-your-child-to-work day. He took pictures on the cinemaâ€™s last day of operation, too, in mid-April.

That was when the building lease for Marcus Theatres Corp. ran out. Carlo Petrick, communications manager at Marcus, said the building was â€œantiquatedâ€ and â€œno longer suitable for use as a movie theater.â€ Regency had been converted to a budget theater in 2006.

Demolishing the building prevents Marcus competitors from taking over the lease, Regency Mall General Manager Curt Pruitt said. It was easier to raze it than to turn it into a different kind of facility, he added.

â€œIt would be so costly, we might as well start with all-new construction and technology,â€ Pruitt said.

Mall management and the City of Racine are still figuring out what to do next with the land. They have some prospects but no strict game plan, Pruitt said.

At about 9:45 a.m., the â€œCâ€ and â€œIâ€ in â€œCINEMAâ€ had been knocked down from the buildingâ€™s left side, facing the parking lot. With the upwards swoop of the Caterpillarâ€™s fingers against the beige brick wall, the â€œNâ€ partially fell, too, contorting into an upside-down heap of metal and wood hanging from the wall.

By 3:15 p.m., the whole sign had been knocked away, along with a large chunk of the buildingâ€™s left side. Melissa Jansen, off from work, stood in front of the boarded-up front door as Randy took pictures.

â€œThis was my first job,â€ said Melissa, 40, who was assistant manager there. â€œWhen I pulled in the parking lot, my heart just started racing,â€ as she remembered years of Halloween parties and dressing up for big premieres such as â€œGreaseâ€ and â€œBatmanâ€.

Bob Tapp, 51, pulled up to the parking lot and joined her. He worked there for 20 years, and he agreed with Petrickâ€™s description of the building as â€œuniqueâ€. â€œMost of it was over 20 years old,â€ he said. â€œThey didnâ€™t enjoy coming here to fix stuff.â€

As Tapp and Melissa Jansen spoke, Randy drove off for work, with a souvenir brick in the back of his pickup truck.

Racine’s last movie theater will have one final show within the next month.

The Racine Fire Department, pending approval of the City Council, will use the shuttered Regency Theater, 5230 Durand Ave., for practice drills before the building is demolished, according to Chief Steve Hansen. (The Public Safety and Licensing Committee approved the training Monday night.)

Firefighters will use the old theater, which shutdown last month, to practice forcible entry drills, to cut holes in the building’s roof and to bust through walls to simulate rescuing a trapped victim, Hansen said.

The theater will not be set on fire during the training, he said.

“It’s rare that the (abandoned buildings) come available,” Hansen said. “We try to take advantage of them as quickly as possible.”

Marcus Theatres closed the Regency theater, which had been serving as a budget theater since 2006, at the end of April. The company had announced plans to close the theater in January.

The move shut the door on movie theaters in Racine. Marcus closed the Westgate movie theater in 2006 after opening the 12-screen Renaissance theater on Washington Avenue in Sturtevant. Racine no longer has a theater that shows movies.

Prior to Regency closing, Racine had an active movie theater until at least 1928, when the Venetian Theatre opened Downtown. No date has been set for the Regency theater’s demolition, Hansen said.

Hansen will appear before the Common Council’s Public Safety and Licensing Committee tonight to gain permission for the training. If all goes as expected, the Common Council will give final approval next week and the training, which will involve every member of the department at different times, will occur within four weeks, Hansen said.

There’s no cost for the training, he said.

Thanks Louis,wish there were more pictures.

THANKS SCOTT. Looks like a mix of GCC and REGAL .

Requiem for a shoebox cinema:

About 20 former employees and movie buffs gathered to reminisce about the former theater and chuckle about old photos taken there, including one of Dodd taking tickets in the same blue coat. Now 45, he stood in an empty field where the cinema stood northeast of Regency Mall and remembered when the place had state-of-the-art technology.

“The lifespan of this building was, like, nothing,” said Dodd, a Mount Pleasant resident who now works for QuadGraphics in West Allis. “It’s amazing to me it has come and gone this quick.”

He did some work at the theater after General Cinema Corp. opened it in the early 1980s and later became a projectionist. Marcus Theatres Corp. converted it to a budget theater in 2006 after building a new multiplex in Sturtevant, but the company soon deemed the Regency building obsolete and it was demolished in July 2009.

Bob Tapp, who spent 21 years of his career at Regency Cinema, wanted to do something as a tribute to Rick Luehr, his longtime co-worker who died last year. Eventually, he said, it “steamrolled” into an event he hoped might serve as a kind of closure for everyone. “When they tore the building down, there wasn’t really an official goodbye,” said Tapp, 52, of Racine.

The former employees recalled the time they ducked into closets and behind the snack counter after a Christmas night fight led to gunshots outside. They joked that police officers seemed to patrol the area more often after the cinema workers began giving them free popcorn.

The regular customers remained fresh in their minds, including one good tipper with purple-tinted hair who insisted her popcorn be made without oil or salt.

But mostly they remembered one another, whether it was the Thursday night sneak peeks at new movies or bringing their kids and friends in to help out.

“It was a close-knit group, so it didn’t feel like work,” said Brian Friedrich, 36, who drove up from Round Lake Beach, Ill., where he’s a property maintenance assistant for The Salvation Army.

Tapp asked the group to write letters to local and mall officials with suggestions for what they’d like to see on the empty lot. Topping his own wish list was another theater.

The $750,000 General Cinema Regency Mall Cinema I•II•III•IV•V•VI was announced in 1981. It launched with free screenings of “Star Trek the Motion Picture” and a Three Stooges retrospective on January 30, 1983. Its official grand opening was on February 4, 1983 with “The Verdict” (2 screens) “Six Weeks,” “Das Boot,” “Videodrome” and “An Officer and a Gentleman.” Seating was 1,600 with 278 seat count at the two largest auditoriums.

Amazing. A city of almost 80,000 people and no movie theater. And there have been 20 over the years.