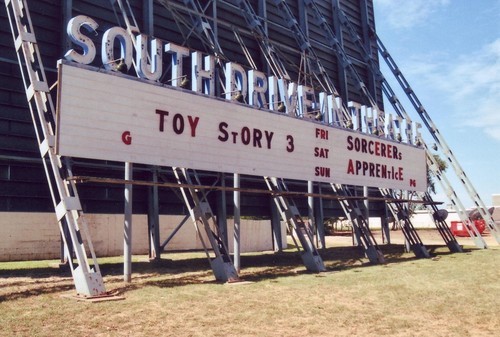 The South Drive-In was built in 1947. This single screen drive-in has a capacity for 300 cars.

Here’s a photo I took back in Nov of 2007..
View link …
There is a few more of the drive in theatre in my photo collection..
RAC Photography

The South Drive-In is owned by Ron & Pam Cooper.

There was a great article in The Legend about the South. It told how Glen Cooper built the South in 1947 and the Boot Hill Drive-In about a decade later. Glen also owned drive-ins in Garden City and Hays. When son Ron left military service, he moved to Hays to run that drive-in, and when Glen passed away, he and his family moved to Dodge City. At the time of the article, 2011, he was worried about digital conversion. “We’d need a rich philanthropist who’s in love with drive-ins, or some kind of grant to do that,” he said.

Now look at the United Wireless Communications web site. It says, “In 2012, our region was in danger of losing a real treasure in the South Drive-In Theatre, which just happens to be our neighbor on McArtor Road. … So we bought it from the previous owners, made some upgrades for showing films in digital format, and have been having a ball giving our friends and neighbors a great place to have fun on warm evenings.”

Thanks for your photos, Chris1982, but I’m guessing that if the Coopers are still involved, they’re probably just managing the South.

That link to the The Legend article has gone bad. Here’s a link to a saved version at the Internet Archive.