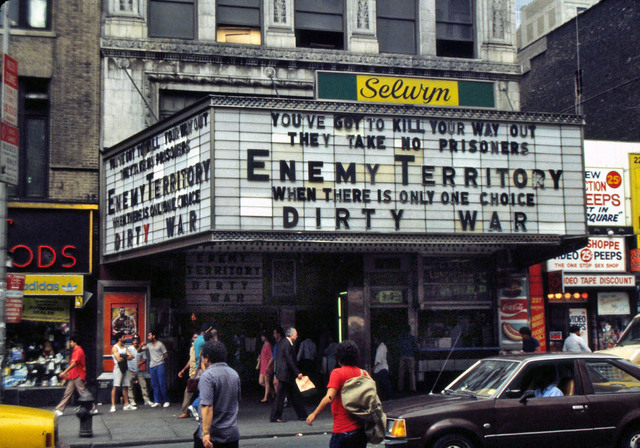 Built by the Selwyn brothers as a live theatre venue amid the bustling theatre district of W. 42nd Street, the former Selwyn Theatre opened on October 2, 1918 with Jane Cowl in “Information Please”. To fill in between live shows, silent movies were occasionally programed, one such in May 1921 when “A Connecticut Yankee in King Arthur’s Court” was screened. After sixteen years of ups and downs, the format switched to movies in 1934 and remained that way until closing in 1997.

The Selwyn Theatre was restored and renovated in the late-1990’s as part of the Times Square Redevelopment Project and became the new home for live theatre and the Roundabout Theatre company, which opened on July 27, 2000 with a production of “The Man Who Came To Dinner” staring Nathan Lane.

Thanks to a large donation and support by the airline company, the Selwyn Theatre was renamed for its generous benefactor, to the American Airlines Theatre.

I don’t know why but this was my favorite heater on the block.

They did a fabulous job rejuvenating this gem.

If you compare it to what Disney did across the street they actually did a pretty half-assed job. The murals are badly faded or covered in dust and many of the wood finishes are damaged or rotting away.

I have to say that I have to agree. The New Amsterdam is a stunning achievement where this theater renovation was disappointing (imo). Granted, the New Amsterdam was one of the most beautiful theaters ever built so perhaps it is unfair to compare the two, but I guess I just did. :–)

In all fairness, I’m sure Disney had a significantly bigger budget for their restoration of the New Amsterdam (which was also in a poorer state of disrepair) than the Roundabout had for its clean-up of the old Selwyn. The New Amsterdam sparkles like the crown jewel that it is. I haven’t been inside the Beacon Theatre since its multi-million dollar overhaul by Cablevision, but I imagine it is on a par with the work done at the New Amsterdam.

Agreed Ed, from what I’ve read about the Beacon, it is truly spectacular. But I still came away disappointed from the Selwyn nonetheless. That said, there is no doubt that the Selwyn was never in the same league as its more celebrated brethren. I’m still very happy that the theater was saved.

I’m with you there, Luis. The sad thing is, of the 9 historic theaters on the block (not counting the stripped down and presumably unsalvageable Anco) that were touted to be held by either the State or the 42nd Street Development Corp for preservation and restoration, we really only have three theaters that remain in a state of preservation: the Selwyn, New Amsterdam and New Victory (another gem).

On a secondary tier of preservation, the shell of the Empire Theatre remains as a lobby to the AMC multiplex that bears its name, and the Lyric and Apollo Theatres were disassembled with only segments of historical interior elements (mostly from the Apollo) used in the reconstructed theater that now sits within their combined footprint.

The Times Square still sits there with its future up in the air and reports are that the Liberty’s auditorium – which sat vacant but largely intact for many years – has recently been stripped away. And most unforgiveably, the Harris Theatre – which was in as good a shape as any of the theatres on the block – wasn’t even given any consideration for preservation, having been completely demolished for the Madame Tussaud’s project.

While I celebrate the survival of the Selwyn, New Amsterdam and New Victory, I bemoan the loss of the Lyric and Harris and feel saddened as the slim hopes for the Times Square and Liberty seem to be slipping away.

That clip was from 1984, seven years after this house closed, but still before its legit rebirth. (The Robby Benson movie on the marquee “One on One” came out in 1977.)

Featured prominently in recreation in the new HBO series “THE DEUCE”. The Apollo and others are also featured in the series pilot episode with meticulous detail, circa 1971.