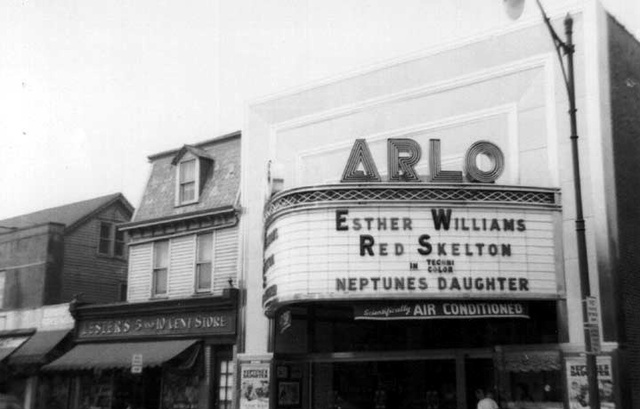 From what I’ve read the Arlo was built in the late ‘40s. It lasted until the early '70s as a theater (the next to last indoor theater to operate in Camden, outlived by the Midway), stayed open for a while after that as a catering hall, then was abandoned.

The Arlo Theatre, designed by architect William H. Lee opened on July 7, 1949. It had about 1000 seats. It was built for and operated by the Varbalow Cirucit who had their offices in the Walt Whitman Theate in Pennsauken, New Jersey. The Varbalow Circuit also operated the first run Savar Theatre in downtown Camden. The Savar name was a combination of Samuel or Sadie Varbalow. The Savar was an eloquent art deco design and the Arlo was reputed to be one of the most eloquent theatres designed by William H. Lee.

In 1963, the Arlo was operated by the Savar Corporation, Henrietta Kravitz president. Savar also ran the Midway, Rio and Savar in Camden, as well as the Atco Drive-In, the Century in Audobon, the Collingswood in that city, the Garden State Drive-In in Delaware Township, the Starlite Drive-In and King Theater in Gloucester, the Circle Drive-In in Maple Shade, the Ritz in Oaklyn, the Walt Whitman in Pennsauken and thr Westmont in Westmont.

By 1967 the Milgram chain had taken over this theater.

The Arlo’s actual address was in the 2600 block of Westfield Avenue. It doesn’t show up at all on the Street View, so it can be given demolished status.

Watched a bunch of first run movies here in the 60’s.
Francis the talking mule was my favorite!!!

The map in the overview places the Arlo Theatre at the intersection of Federal St, S. 27th St. and Baird Blvd. in East Camden. The Arlo was actually located a block North on the 2600 block of Westfield Ave.

I adored the Arlo theater. I went to see great movies there for years when I was growing up in Camden, NJ. I especially remember seeing Tales From The Crypt starring Joan Collins there and being terrified by it. I also saw many entertaining kids films there as well. Does anyone remember the names of some of the kids movies they may have seen there?

A late answer for Marksb on what children’s movies may have played here in the 1970s: Off the top of my head: Disney Summer Film Festival (weekly Disney classics. Usually a cartoon with a live action movie. Example: The Million Dollar Duck and Dumbo. Disney must have made a fortune off of these old movies that ALREADY did well in the past!) . Other movies that littered the “kiddie matinee” circuit: The 1966 Batman movie, Munster Go Home, The Legend of Boggy Creek, various Godzilla movies “…Vs. Smog Monster”, etc. The Incredible Mr. Limpet, the all 5 Planet of the Apes movies in a row, various low budget science fiction movies like “Journey to the Far Side of the Sun”, “Mission to Mars”, etc. , odd movies like “Zebra in the Kitchen” and “Digby, the Biggest Dog in the World”, “Mr. Super Invisible”. Lame Christmas movies : “The Christmas that Almost Wasn’t”, and some Rankin Bass stuff: “MAD MONSTER PARTY”, “Willy McBean and his Magic Machine”. All in all, a kiddie matinee in the early 1970s was 50 to 75 cents; so it was basically a “baby sitter” for 2,3, 4 hours.