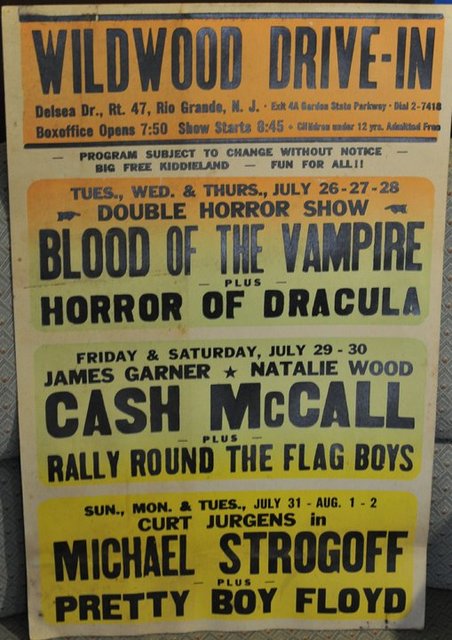 The Wildwood Twin Drive-In owned by Fox theaters of Philadelphia opened on July 28, 1950 as a single screen drive-in. In 1976 a second screen was added. This drive-in had a capacity for 470 cars.

The Wildwood Twin Drive-In closed after the 1986 season. The original address was Wildwood Boulevard (Route 47) at exit 4A of the Garden State Parkway.

I had never heard of a Rio Grande in NJ!
Must have been settled by folks from the great Southwest.

Thanks Lost memory. What a great site. I remember all the theaters in Wildwood. It’s a shame they all closed and were ruined when the Frank Family purchased them in 1986.They ruined everyhing they touched.

Hey Mikeoaklandpark, don’t go to Wildwood now or you’ll lose your lunch. The old Shore Twins was demolished, and is just a big dirt lot. Only theatre left is the Strand which looks like hell from the boardwalk.

I remember Rio Grande. There used to be a Starn’s supermarket there that my mother went to once in a while. I don’t remember the drive-in, though.

Around 1981 or 82 I was there with my family in our 55 chevy to see “The Swarm” with Henry Fonda. The manager “Ed”, from Millville offered me a P/T job as manager/operator for 40 bucks a night. I declined because I was already working @ the Atlantic Drive-in, & as a Rural Letter Carrier in the daytime.

I grew up in Rio Grande and lived on 3rd. street, behind the drive in. From my back yard your could see the entire screen which was maybe 1/8 mile away. During the early 60’s my father and a neighbor ran wire from the one of the speaker terminals in the back row and into our backyard. We were living!!….we could sit in lawn chairs and watch the movies. A couple of years later they paved Maryland Ave., the road between us and the drive in, and ripped up the wire….the party was over. The drive in had a nice little playground right in front of the screen that we as kids hung out in along with the surrounding woods and fields. Those who have never rolled up to a speaker post, hung the speaker on the car window and walked over to the Snack Bar during intermission have never “lived.”

So was the theater demolished?