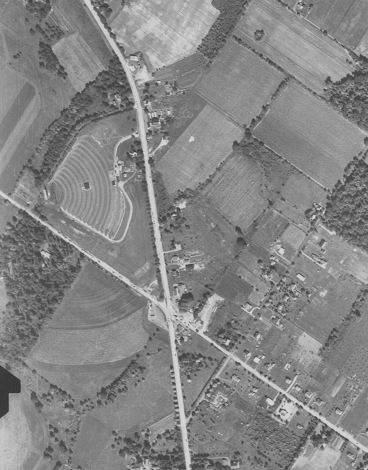 The 309 Drive-In was located at the corner of Route 309 and Route 63. It ran year-round with propane in car heaters. You would buy your tickets at the box office, park and then walk to a small heater building to get your in car heater. You had to leave your drivers license or owners card to receive the unit and you would return it and get your card back. This was done this way at many of the Budco theatres in the area. A second screen was added in 1981. It was closed in 1986.

MikeRa, The 309 Cinema at the front entranceof the drive-in (entrance drive, box office and main office). They WERE NOT OPENED BY GOLDMAN. The drive-in was built by the Smith family and run by Budco. Budco built the 309 Cinema. I opened this theatre as a single screen house. It was twinned and then went (9). Budco was the largest chain to RUN D-I’s in the tri-state area.

Budco and Goldman started out as different companies. Budco bought the Goldman theaters sometime in the ‘70s.

mikera: Budco Theaters was from Doylestown, Pa. Budco did not really own theaters, it managed, booked and operated theaters. Many of the theaters were independently owned. Budco owned several small groups of theaters. One was Schlanger theaters which operated the Plymouth cinema, Norris theater, Ridge Pike D-I, Valley Forge D-I. The Ply., Ridge and V.F. were owned by the Sabaloski family from Norristown ( which and one time operated 5 theaters in Norristown). Budco Theaters bought the Goldman chain to get a foot hold in center city.
The name Budco is a part nickname BUDDY. If you have any questions about the early days of Budco let me know. Will try to help you. Most of the theaters under the Budco banner were D-I’s. When D-I’s were king. We had some great times and some great promos with WIBG radio. Hope this helps.

The only Goldman Theatres that I know were Goldman Theatres, outside of Center City, were Bryn Mawr, Orleans and Andorra. Other than the 309, the Plymouth and the drive-ins (which are not Goldman’s, but Budco, and the Hatboro, which was acquired by Budco in 1973) Who owned The Anthony Wayne, The City Line Center, The Doylestown Barn, The Doylestown County, The College, The Community, The Ellisburg Circle, The Esquire, The Exton, The Gateway, The Springfield Cinema, The Surburban, and The Ritz in Oaklyn, NJ?

This drive-in was located at what is now the Gwynedd Crossing Shopping Center. The screen was where Whole Foods Market stands. Approx. address is 1210 Bethlehem Pike now in North Wales.

Raymond, rg i’d like to get a hold of you, interested in the history of the
Budco chain of theaters. Tried your aol address and was blocked.
My email is

raymondgordonsears: My grandfather was EVP of Budco. His name was Pat Beck. Based on some of the comments of your’s that I have read, it sounds like you may have potentially had some contact with him. I would appreciate it if you sent me an email to discuss. I never met him, but would like to learn some more about the man I am named after! Thanks!

According to the Philadelphia Inquirer, the 309 Drive-In actually has 2 screens since 1981 as the 309 Twin Drive-In.