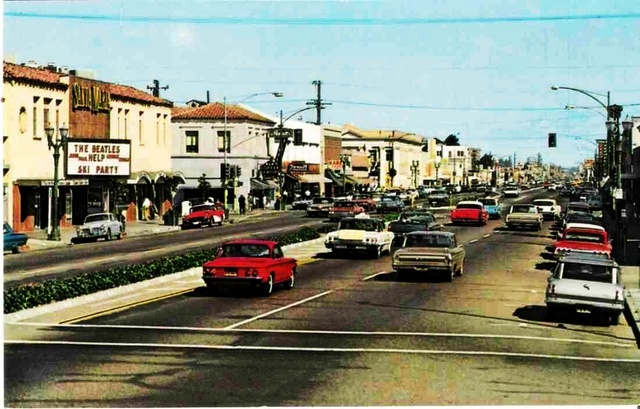 Wow! Memories and more memories, this was a great theatre, tucked in right along broadway, I remember seeing “Born in East LA” there back in 87'. The entire block was historic and it’s an absolute travesty what happened to it. This whole block was torn down so we could have a shopping center with a foot bridge that crosses over broadway and connects the mall to the shopping center. The shopping center is mostly vacant and Mervyns, the biggest store that was there, has been closed and empty for ten years. It’s the Santa Maria version of “the bridge to nowhere”. Bonnach nailed it, almost all of the things that made Santa Maria a nice quaint little town, like the SM theatre, have been bulldozed and replaced with strip mall garbage.

I’m pretty sure this was the theater I saw Rocky IV on Thanksgiving night in 1985. My first and only visit as I was in from out of town for the holiday visiting family. I remember it being kind of small and intimate, not a venue with 1200 seats.

The Santa Maria Theatre must have been twinned in its last years, which is probably why Flix70 remembers it as being smaller than 1,200 seats. Check the 1983 photos linked earlier. The signage on the building didn’t specifically claim two screens, but there are two different movies on the marquee, each with the same starting times. There had to have been two screens.

Maybe not referring to twin screens. The Santa Maria had the regular screen plus a cinerama screen for some special type of movies. Also, the upstair seat area was closed for some years because of safety concerns- the bottom area seated only 973 if a notice in the office was correct(I went there to sign a waiver of responsibility of my safety because the owner was afraid somebody would sue him if I got hurt at one of my all-girl get togethers). bonnach said: “Santa Maria has very little sense of history unless there is money in it.”– The guy running the museum(Chamber of Commerce building) runs it to suit his financial needs by changing history if the price is right.

As I noted in an earlier comment, architect Lewis A. Smith was commissioned to design the Santa Maria Theatre for Sol Lesser’s recently-founded Principal Theatres circuit in early 1927. However, as completed the house was designed by the architectural firm of Balch & Stanbury for the West Coast circuit, in which William Fox had recently gained a controlling interest. A photo of part of the lobby of the Santa Maria Theatre can be seen at upper right on this page of the December 28, 1929, issue of Motion Picture News, which featured a portfolio of Balch & Stanbury’s theater designs.

The August 12, 1927, issue of Southwest Builder & Contractor noted a project in Santa Maria for West Coast Theatres that was to be designed by architect Carl Jules Weyl. As the Santa Maria opened as a West Coast house, it is likely that the chain had taken over Lesser’s project, which was to have been at S. Broadway and Church Street, the location of this house.

I don’t know if anything survived from Smith’s or Weyl’s designs after Balch & Stanbury took over the project. I also don’t know what ended Lewis Smith’s career. It has previously been erroneously reported that he died in 1926, but his page at the Pacific Coast Architecture Database, which once included the error, has since been corrected to say that he died in 1958. From the late 1910s through 1927 Smith was one of the most prolific theater architects in Los Angeles, but he appears to have left the profession suddenly at that time, and I’ve found no evidence that he practiced architecture after 1927. A number of his commissions from 1927 ended up in the hands of Balch & Stanbury, and the Santa Maria Theatre was one of them.

According to “The Encyclopedia of the American Theatre Organ”, pg. 629, the “Santa Maria Th.” in Santa Maria, California, originally had a two manual, nine rank Leathurby-Smith theatre pipe organ, install date not known (at the time of publication in 1989), and blower info also unknown.

Does anybody know what happened to this organ? Thanks!

Experienced my first walk-in big screen movie in this theatre back in the late 1970’s starring Chevy Chase. It was 1 big screen at that time and the hot real buttered popcorn was amazing.

Later, I worked at the Park Aire Drive-In & filled in at the Santa Maria Theatre during the Summer matinee times in the early-mid 1980’s.

Before the Santa Maria Theatre was closed it went through an additional remodeling in which 2 small theatres were added upstairs for a total of 4 screens. Both upstairs screens had separate projection booths which made running matinee showings a work-out in itself. I believe the initial remodel (initial “twining”) occurred in early 1980’s.

I have an old Santa Maria Times front page article discussing the close with Gary Galt (sp?) pictured that has more details and will attempt to add a scan of that information later as time permits.

The sketching of architect Carl Jules Weyl is in photos. 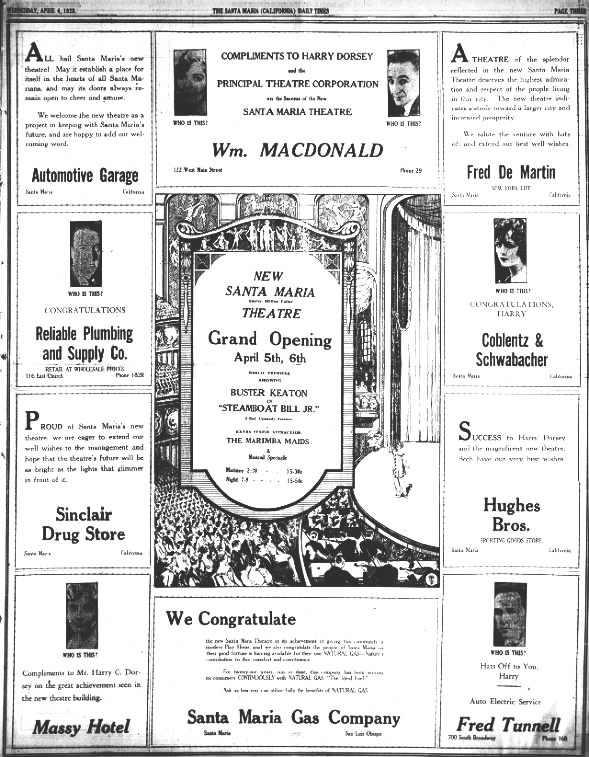