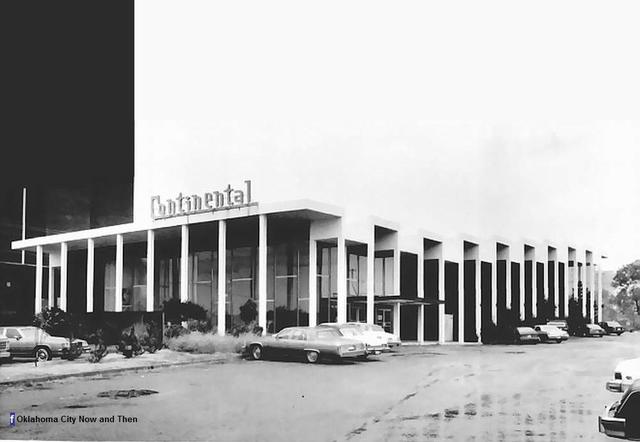 It briefly became a church, and in 1983 had a very short run as a movie theatre again. The building was demolished in 2006.

All three Continental Theatres (Tulsa, OKC, Denver) were built by my grandfather R.L. Barton who owned Barton Theaters. It was his attempt to bring back audiences by providing a “classy” movie experience. My father served as the original manager for the first Continental in OKC and had to wear a Tuxedo eveny evening. The concession served juices not sodas and imported candy not popcorn to try and enhance the upper class experience. It was designed with state-of-the-art equipment and featured a cinerama screen composed of hundreds of vertical strips of reflective material set on a curve to precisely reflect the picture onto the audience. I watched it being built and went to the grand opening. The booth in the OKC Continental had a door that oppened into the auditorium about 12 feet above floor level so that the huge 70mm film cans could be moved to/from the booth.

The Continental was the premiere roadshow house in OKC…I recall seeing The Hallelujah Trail and Chitty Chitty Bang Bang there as a kid. Here’s a view from 1995:
View link

The architect’s surname is currently misspelled in the info section at the top of this page. The correct spelling, Calvin Garrett, can be found in the by-line of the article he wrote about the house for Boxoffice Magazine in 1966, which is linked in rodesideok’s comment of July 23, 2005, above.

To very belatedly answer Michael Coate’s question from the same day, the article comes from the March 21, 1966, issue of Boxoffice Magazine. An earlier article, in the September 13, 1965, issue of the same publication, when the Oklahoma City Continental was nearing completion, said that construction was already underway on the Tulsa and Denver Continentals as well.

As a teenager I actually worked as a doorman at the OKC Continental in 1968. I recall when I started we were showing Doctor Dolittle, which we ran for what seemed an eternity because of the nature of the contract. Many nights there were as few as 3 people in the theatre.
Later films during my tenure were War & Peace, Ice Station Zebra and one of my favorite films of all time, Mel Brooks “The Producers”, which our manager at the time actually created the marque artwork for.
I remember that we only sold Coke and Tobler chocolates which you could not take into the theatre. That ruling relaxed when we began having some soft ticket shows and at one point we even added popcorn. Some of the chocolates were returned by patrons because they were so old that the dark chocolate had turned white.
It was a beautiful theatre and not a bad seat in the house.
My favorite seats were Row F Seats 17 & 18, just far enough away so that the screen, which was constructed from perforated strips that occasionally needed to be adjusted due to the airflow through the screen, ‘surrounded’ you. What a great experience!

The Continental was hands down my favorite theater in OKC growing up. Here’s a memory — was anyone else there?? In 1980, my brother and I went to the Continental for the premiere of CAN’T STOP THE MUSIC, one of the worst movies ever made, but over the passage of time has taken on the patina of camp classic. For the local premiere, the film’s co-writer and producer, Allan Carr (producer of several disco movies of the era) flew in on a helicopter which landed in the parking lot. He got out wearing a big white cowboy hat and a white rodeo suit — his homage to us “Okies” I suppose — but for us it was rather embarrassing. There were only about 20 of us gathered in the parking lot on that hot summer evening for the big splashy “premiere” so the whole event took on a sad, anti-climactic air, especially since the Continental had gone to such great lengths to promote it, searchlights and all. I still miss the Continental. I also saw Gone with the Wind there in revival, Moonraker and The Pink Panthere there. Cheers all!

Speaking of belated comments, I can only hope that Harold above ever sees this. If you do, I want you to know that if your father was “Harold”… he was one of the nicest, kindest, gentleman I ever knew.

I grew up living next door to Robert Lewis Barton. I worked in almost every theater the Bartons owned with the exception of the Continental. I was actually at the employee’s premier showing of The Greatest Story Ever Told which was held the morning of the day of the Grand Opening that evening.

I am going to cut this here, for now, just to be sure things are working as I am a new contributor. If this works, heh haha, then I have a truckload of information to add regarding Barton Theaters.

@ Gridleak, this is Harold Barton Combs and I’d like to get in touch with you regarding your memories of Barton Theaters and my family. My email address is

This opened on October 21st, 1965. Grand opening ad in the photo section.

Mid-America Theatres Circuit closed the Continental after showing “2001: A Space Odyssey” on September 30, 1982 ending its continuous theatrical life. It had a brief run as a church and did have its final film screening in 1983. A classified ad shortly thereafter offered all of the seats for sale.