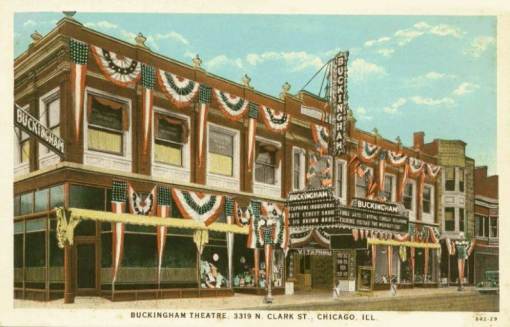 The Buckingham Theatre opened on June 6, 1914 with Maurice Costello in “Mr. Barnes of New York”. It was located in the Lake View neighborhood at N. Clark Street near Buckingham Place. This theatre once contained a 2/7 Wurlitzer theatre organ and could originally seat 965. It was taken over by Warner Bros. Circuit Management in 1931.

The theatre itself has been demolished and replaced by condominiums, but the storefronts and façade have been retained.

The Buckingham, at Clark and Buckingham streets, now has loft condominums behind it, built in 1998. A sporting goods store and a bank are housed in the storefronts. The facade is quite nicely preserved, and the building pays homage to its roots with concrete signs above its garage entrances reading “BVCKINGHAM BVILDING” and “BVCKINGHAM THEATRE”.

The Buckingham’s site is very odd-shaped; I wonder what the interior was like.

In 1931, the Buckingham was one of many theaters purchased by Warner Bros. In 1933, it was robbed 3 times in one week, netting a total of $39 for the burglars and severely unnerving the two box office girls. It may have closed as early as 1953.

Although Organic did not open at the Buckingham until 1981, plans to do so were in place as early as 1976. It took some time to raise funds, and there were numerous setbacks along the way before the National Endowment of the Arts issued a matching grant and the building was donated. When it opened in 1981, it had 299 seats and was reconfigured substantially from its days as a movie theater

By the 1960s it was easy to walk past the Buckingham (note the postcard Lost Memory link of May 1, 2007), with its narrow storefront entrance so similar to the other storefronts along the block, and, if not looking for it, miss the Buckingham Theater entirely. The postcard does justice to the block as I recall it; though it might be representational of 40-50 years earlier.

I do recall seeing films there as late as 1967. Remarkably, it screened some fine films (I wondered how), competitive with many theaters then (perhaps owned by a substantial chain). This made it a viable option in choosing a theater in the area though it wasn’t at all a showcase. It never seemed to have a concentrated audience, i.e., groups and couples. Teenagers, or singles tended to make up the audience, as I recall. It was surprising to me it never hinted of closing in those years. Every once in awhile one would look through the newspapers to see what was playing at movie houses in the area, and be surprised that the Buckingham, small and indescript though it was, always seemed to be offering worthy choices.

This was a residual neighborhood theater but Clark Street hosted high vehicle traffic then, especially when the Cubs were playing at Wrigley Field down the street. There was also an active neighborhood market along this street. It was a neighborhood where Clark St., though not a wide street, but a long one on the north side of Chicago, became too fast for it; traffic sped along and it wasn’t appealing for pedestrians to cross it, or stroll.

On the west side of Clark St., was an old immigrant community where grandparents still owned their old houses but their children were grown and gone in the main. Yes, there were some young families; it was an almost still neighborhood, in transition. Behind the theater in the neighborhood on the east were likely to be found more singles and young couples. Clark St. separated two distinct neighborhoods there, and the Buckingham may have served more the neighborhood behind it to the east.

The Buckingham didn’t inform the street then because it was so easy to miss. I am not sure that the vertical sign of the theater was in place. I think there was some type of marquee, but am not sure it was as extensive as that in the postcard. Unless you were walking along looking for the entrance, you could miss the Buckingham (even with its long name). Evidently it still probably had a longer life than anyone would have imagined for it.

When I was a teenager, I left the Buckingham Theater one Sunday afternoon alone; it had started pouring rain while I was inside. Without an umbrella, I waited and waited for a bus and none came. It was clear a Cubs game had just ended, and traffic taking spectators home sped along Clark St. I started to look for a taxi, and at that moment one pulled over, and a woman, whom I never saw before or since, invited me to get in out of the rain and ride north with her since she was already heading in that direction. She told me she attended all the Cubs home games she could, usually drove but didn’t that day, and had just “gotten lucky on a bet” so that was the way she invited me to ride as far as I needed on her route home. I hesitated, (this was dangerous, and I never came close to doing such a thing before or after), but she insisted and said it was a public taxi; and I ended up accepting the ride. She talked about the Cubs with me and the taxi driver, and I arrived home none the worse for the rain. My Buckingham Theater story, and a kind of Chicago story, I think, for that time.

Architect Lovell’s first name should be spelled Sidney. Find a Grave has a photo of his tombstone.

This advertisement for asbestos ceiling treatments shows the Buckingham’s rather plain interior.

The 1937 ad Broan linked to must depict the results of a renovation of the Buckingham. The photo shows some detailing along the auditorium’s back wall and adjacent to the ceiling vault, but not enough to determine what the original interior style might have been. More of the original design might have survived at the screen end of the auditorium, at least until wide screens came along in the 1950s.

Two images added to gallery. One 1981 auditorium photo from below Chicago Tribune piece on Stuart Gordon.