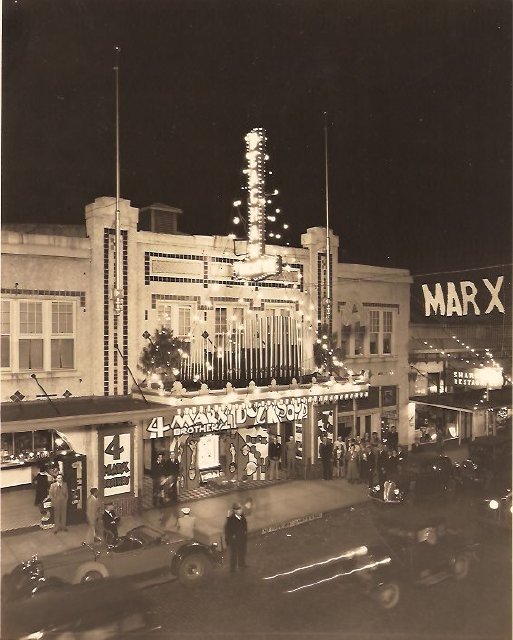 Drove through Downtown Orlando to take some pictures of the theatre (and others) to share with you. See View link

I remember it was THE premiere downtown theatre in Orlando. My first visit to the Beacham was in 1961. It was my friend, Jeff Brown’s 7th birthday and we went to see “101 Dalmations”. After the movie was over, my mother and Jeff’s grandmother took us around the corner to Morrison’s Cafeteria. Back then cafeteria food was really good and Morrison’s was the best!
Years later, after they put in the new Cinerama screen my mother took my brother and I to see “The Sound of Music”. It was so successful the picture ran for 18 months!
Even as a kid when my parents owned a drive-in theatre in the 50’s,
I was interested in film projection. In 1971, I was the youngest projectionist in town. The BA of local 631 just happened to work at the Beacham. His name was Dick Gabel. He was a grey-haired man in
his early 60’s. He gave me a tour of the booth. Since I was used to old drive-in theatre equipment, I had never seen such a beautiful projection booth. “So this is the good stuff”, I thought to myself, Norelco AAII projectors, Ashcraft Core-lite lamphouses, equipped to run 6 channel sound on 70mm film, nothing but the best of everything. Later on I met the other projectionist, a heck of a nice guy by the name of John Prine. Turns out Gabel, Prine and Ambrose all initiated into the local on the same day in 1929! Unfortunately, Florida State Theatres fell into hard times and closed the Beacham and Colony in 1975. The Plaza stayed open for another 7 or 8 years. One day I got a call from the BA and he asked me to go down and help with the clean-up. I didn’t know what he meant until I got there. What a mess! Apparantly during the month’s time the theatre was closed, the hot-water heater had burst and clouded the booth with steam. By the time it was discovered, every bit of exposed metal had a thin layer of rust on it. Even the aluminum reels were pitted. It took weeks of cleaning and polishing and changing the oil in the projectors to get everything operational. To my amazement, projectionist John Lawson was able to dry out the amplifiers and get them running again! One day I remember discovering an old picture in the managers office. It was taken in 1936, in front of the theatre, on the marquee was “Mr Deeds Goes to Town”. In the picture, all of the ushers were lined up and they all wore white spats! I walked around the auditorium and looked at the ribboned Cinerama screen for the last time. The following year the theatre changed hands and became The Great Southern Music Hall.

Somehow flickr changed the setnumber of my above photo, so the new link is View link

A small “before” photo of the Beacham Theatre and an architects rendering of the remodeled facade appeared on this page of Boxoffice, January 6, 1954. Plans for the remodeling project were by the architectural firm of Kemp, Bunch & Jackson, the firm which took over the practice of architect Roy A. Benjamin upon his retirement in 1946. There’s a possibility that Benjamin was the original architect of the Beacham, but I haven’t been able to confirm this.

In my previous comment, the date of the issue of Boxoffice in which the article about the Beacham appears should be January 9, 1954.

I was greatly frustrated by COLOREDand WHITEdrinking fountains at Kress and segregated lunch counters at drug stores (Liggett-Rexall, Emerich, and Stroud) and other dime stores like Woolworth, Grants, McCrory in downtown Orlando. Blacks were also barred from white-only movie theaters like the Beacham, Rialto, Roxy, and Astor in downtown Orlando, the Colony in downtown Winter Park, and the Vogue in Colonialtown.

The inviting smell of hot buttered popcorn (made with real butter) tried in vain to lure me inside while passing the box office of the first-run Beacham Theater on Orange Avenue, but I dared not enter. In 1954 I looked up at the dazzling flashing neon marquee advertising CARMEN JONES starring Dorothy Dandridge, my favorite actress of all time. Posters of sassy Dorothy as Carmen striking that world famous provocative pose were plastered all over the place, but I would have to wait 6 months to a year before that black movie classic moved to the new Carver Theatre for colored people on Church and Parramore Streets.

That hurt me deeply, because in Detroit or LA I would have walked right in any theater without giving it a second thought. Less than 3 blocks away from the Carver sat the rat-infested pre-historic Lincoln Theater where movies were even older, but the food was better. Both colored theaters were owned and operated by the Gordons –husband, wife, and Baby Hughey (their grown son). Baby Hughey was weird indeed and everybody called him a “punk"(the colored term for "homosexual").

In the early 60’s teen activists in the Youth Council of the NAACP were arrested while demonstrating against segregation at the Beacham and other public places in Orlando. I was president of the Youth Council when we engaged in sit-ins, wade-ins, and mass civil disobedience challenging southern tradition and American apartheid in the land of the free.

We also picketed the Carver Theater to show first run movies. We even planted a stink bomb (made in our Jones High School chemistry lab) in the Carver and howled as as those who crossed the picket line ran out screaming and cussing!

The first movie I remember seeing at the Beacham after it integrated was “Circus World” (starring an aging Rita Hayworth) in 1964. By the mid-70’s the Beacham had been renamed the Great Southern Music Hall featuring live acts like “Weather Report”. I tried without success to book The Supremes at the Music Hall but the famous trio rang in the 1974 New Year singing “Love Train” at the Contemporary Hotel at Disney World.

The Beacham now sits dirty and derelict in scruffy downtown Orlando, both in dire need of a major facelift. It is sad to think that the bright blinking lights and the smell of hot buttered popcorn are gone with the wind.

Here is my picture from September 2011.

Saw the"Police" on their first North American tour. It was shortly after Roxanne came out. What a great show. Back then who would have thought what they would eventually become. Looking forward to seeing “The Killers” in August. Brandon Flowers the lead singer is now appearing on Guitar Center Sessions on DirectTV Audience channels, 101, 239