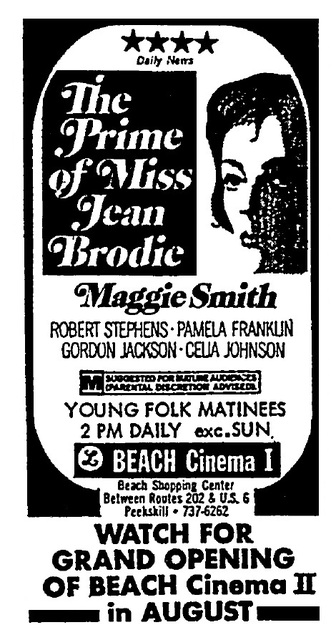 The theatre was a large and comfortable house with 600 seats a large 40 foot screen with curtains and designed by the architectural firm of Meyer and Kasindorf of Great Neck, Long Island.

All of the Lesser cinemas were first run ‘family theatres’ and showed many of the top pictures of the era like the Bond thrillers, “The Great Race”, “Around the World in 80 Days” and other epics. What made the Beach Theatre unique among Lesser’s houses was that it was the only cinema set up for 70mm in Westchester to my knowledge. They played “2001”, “Fiddler on the Roof”, and “Sgt. Pepper’s Lonely Hearts Club Band” there in the large format when I attended. Both picture and sound were excellent for a suburban theatre.

Aside from the consession stand, free coffee was served to adults at some shows.

Like many suburban theaters in the era, they had special Children’s Matinees on the weekends prior to the first run feature. K. Gordon Murray imports were screened along with MGM Matinee classics like “The Wizard of Oz”.

Unfortunately, the late-1960’s was not an ideal time to open a ‘family theatre’. In 1968, the production code was dumped in favor of complete screen freedom accompanied by the ratings system. Incrementally, more and more R and X rated pictures glutted the marketplace. Although Beach Cinemas I & II continued to book mainstream G and M/GP/PG features, this became increasingly difficult when there were more R rated movies produced than general attendence circa 1972.

The Beach Theatre did book an soft core X rated title, “I A Woman” as a test but people from the community complained so they avoided that type of product again.

The theatre suffered bad times in the late-1970’s as audience demographics changed from general attendence to ‘targeted youth’ viewers.

The two large screens were eventually twinned into four tiny ones. The conversion was so shoddy, the aisle seats in cinemas 1 and 4 were facing the wall rather than the screen. The same projection booth was used for 1 and 4 too which resulted in keystone focus problems.

The theatre folded in the 1980’s and was gutted for office space.

Wow, thanks for all this information. My parents lived in Peekskill from 1979 until they both passed away in the last two years…I had been by the Beach Shopping Center numerous times but, for some reason, the fact that the theaters were gone had escaped me. During the last year they did a major overhaul of the center; a new satellite CVS building was constructed, and the old Grand Union was demolished along with other stores on that side of the complex to make way for a Super Stop & Shop. So where were the theaters? I had been under the impression they were in a seperate building on the western end of the parking lot, but now I can’t picture what’s still there.

Wait, the Beach Shopping Center was and still is on Dayton Lane between 6 and 202. The Cinema was on the other side of Dayton lane and it was open until the very early 1990’s. At least the one by the Beach Shopping center was. I remember being taken to see a lot of those early 90’s kids flicks there (Adam’s Family, Might Ducks, Three Musketeers, etc.)

There are photos of the front and the auditorium of the Beach Theatre in Boxoffice of January 15, 1968. Boxoffice misspells the name as Beech.

wow, great find. That’s it. I remember the lobby and entrance area quite clearly, that and the uneven ground that dropped off going toward the rear of the building

I’m now thinking that Boxoffice might have had the correct spelling of the theater’s name. A court case in the 1970s consistently refers to the company operating this house as Beech Cinema Inc. or Twin Beech Cinema Inc. The law tends to place considerable importance on correct spelling. The theater was a considerable distance from any beach, but I have no doubt there are still plenty of beech trees in its neighborhood.

The theater was quite a way northeast of the spot where Google Maps has placed its pin and where Street View is currently set. In the absence of a correct address, Main Street and Dayton Lane would probably be a better location to list than Beach Shopping Center. Google Maps finds the intersection easily enough.

I went there as a teenager every weekend saw all the good movies die hard tango and cash halloween 4 and 5 national lampoons loaded weapon 1 etc….