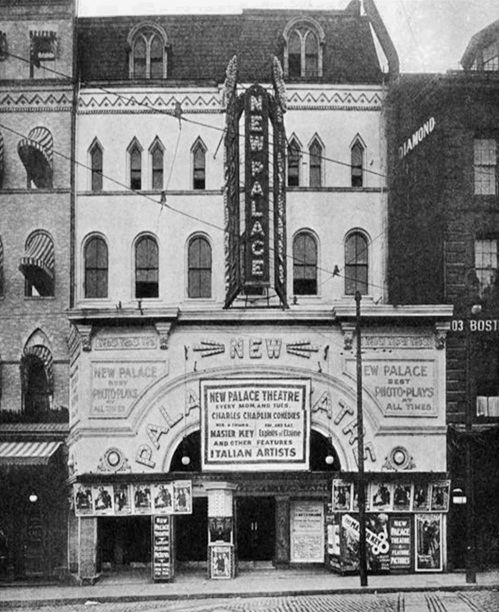 “The nearby Palace and Beacon theaters at first featured live talent such as local boys "Sliding” Billy Watson (named for his across-the-stage skid on a banana peel) and Dave Marion. Movie screens were later installed as an additional novelty. Soon, the live shows disappeared and the theaters became strictly moviehouses".

An ad for the theater, reproduced in this book, reads

MEET ME AT THE

The ad has a photo with several signs reading “NEW PALACE THEATRE”, “PICTURES”, “VAUDEVILLE”, and “10c”.

I don’t know how long the Palace stayed in operation. In the early 1960s, nearly every building in Scollay Square, including all of its stage and movie theatres, was demolished to make way for Boston’s Government Center.

Thanks to Deanna for posting an interesting program— too bad there’s no date on it. Note the Lessee, Gitruh Amusement Co. Gitruh is Hurtig spelled backwards— could this possibly be Hurtig of Hurtig & Seamon, noted theatrical producers many decades ago. You can find the location of the Palace on a 1928 colored map which Ron Newman posted last June on the page for the Strand Theatre in Scollay Square. The Palace was located between Hanover Street and Sudbury St., (closer to the latter), and is identified on the map simply as “Theatre” without the Palace name.

The Palace is visible, and properly identified by name, on this 1895 map. It is on the east side where Sudbury and Court streets diverge. (Thanks to Ron Salters for noticing it.)

The history of Boston theatres book written by Donald King states that movies were presented at the Palace as early as 1897, using the “Aumorgraph” system.

What makes the Palace even more important is that in a laboratory in the attic, Thomas Edison invented his first patented invention (the automatic vote counter) and Alexander Graham Bell and Thomas Watson first heard the sound of a human voice over their invention, the telephone (that event is commemorated by a plaque that now sits in front of the JFK Federal Building.)

The Palace is listed in the 1928 Film Daily Yearbook as part of the Boas Circuit, run by L.M. Boas at 40 Court St. in Boston. Boas also ran the Park Theatre on lower Washington St., plus the Olympic in Bowdoin Square, as well as a “Rialto” and “Strand” in Boston. If the latter two houses are the Rialto and the Strand in Scollay Square, then 4 of the Boas houses were located close together in the Scollay/Bowdoin area. (The Boas head office was also in this area).

The Billboard trade paper of Sept 8, 1906 has an artice by their Boston correspondent about the opening of the Fall theater season in Boston. The Palace opened with Bob Manchester’s “Cracker Jacks” on stage. The busy Bob Manchester also had another show opening at the same time at the Lyceum Theatre (which was demolished to make way for the Gayety/Publix) on Washington Street downtown.

In the book “Boston Then and Now” by Peter Vanderwalker (Dover, 1982) there is a photo taken in 1925 which shows the Bowdoin Square Theatre on the left and the Palace Theatre’s marquee in the center-distance. On the next page is a similar photo taken in 1934. The Bowdoin Square Theatre is still there, but the Palace and its front building are gone.