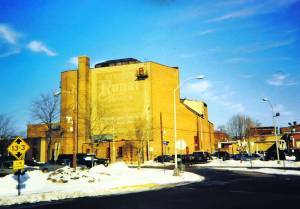 Built in the early-1920’s as Stern’s Royal Theater, this was one of the most popular theaters along the “Bloomfield Avenue Route” out of Newark. One of the most elaborate ceilings in the Rococco style, the building also boasted a block-long lobby with a white granite floor, to boot. 1,700 seats on one floor (no balcony) and one of the largest screens in the area coupled by precision point projection made for a great movie going experience.

Sadly, the great size of the building made heating and air conditioning prohibitively expensive, and on March 31, 1978 the building was twinned (boxed in) and the effect was neither pleasant nor profitable. Not sure who presided over the Royal Theater’s final demise, but it seems to have been torn down in the late-1990’s. A sad end to a once proud building!

The Star-Ledger (Newark, NJ), Oct 1, 2000 p035
Curtain to drop on the old Royal. (COUNTY NEWS)
Full Text: COPYRIGHT 2000 The Star-Ledger. All rights reserved. Reproduced with the permission of The Star-Ledger by the Gale Group, Inc.

There hasn’t been a concert, movie or show at the venue in at least two years.

The only sign of life is the theater’s marquee, which flashes “You’re in Bloomfield … Drive Safely,” to travelers along Bloomfield Avenue.

Inside the once-ornate theater is a hard-hat area with chunks of falling plaster, pigeon feathers and a flooded basement.

The town council thinks the theater stands in the way of progress and plans to demolish the building this winter to make room for a mall and a parking garage – two projects officials hope will invigorate Bloomfield’s downtown. ‘'The best use for the land on which the theater sits is modern retail space to attract national and regional retailers and parking,“ said Don Smartt, project director for the Bloomfield Center Alliance, which represents downtown businesses in the redevelopment efforts. "If we are going to capture the market potential from Midtown Direct, fill vacant stores and meet niche shopping needs, the theater must be demolished.”

After years of debating the building’s fate, politicians are itching for a sign of change in the downtown.

Knocking down the theater, which has become a symbol of downtown morass, will make a titanic statement that the town is serious about economic redevelopment, they say.

‘'Everyone has been waiting for some concrete action. Up until now, downtown redevelopment has been all about planning and studies,“ said Councilman-at-large Tim Kane. "It’s part of Bloomfield’s past, and change is inevitable.”

The township is already looking for the lowest bidder. Town Engineer Anthony Marucci received the go- ahead last week to advertise for the demolition of the building.

‘'The building is in terrible shape. There was water in the basement and falling plaster everywhere. We received an estimate of $10 million to restore the theater,“ said Town Administrator Mauro Tucci, who remembers spending his Saturday afternoons at the theater as a kid. "It’s such a tragedy that it’s outgrown its usefulness.”

There’s no committee to save the Royal, as often happens when popular landmarks are scheduled to meet the wrecking ball.

Township officials say the building has no significant historical value and is simply not worth saving.

Councilwoman-at-large Martha Skinner considered using the building as a meeting place for the Bloomfield Youth Guidance Council until she toured it earlier this year. “Right now, it’s a safety hazard,” she said.

But every time Walter Gollender passes the theater, he can’t help but think of the day in April 1965 when kids were lined around the block to get in.

There were marble floors, red velvet and a lot of fun.

Gollender, a local promoter, was sponsoring a talent show at the theater, and the cost of admission was $1.25, the same as for a matinee. Local high school kids had a chance to display their talent for their friends.

The stage was so large that Gollender remembers having two bands set up on different parts of the stage while the master of ceremonies entertained the crowd at the other end.

Max Weinberg, drummer for Bruce Springsteen’s E Street Band and “The Conan O'Brien Show,” once said in an interview that those talent shows at the Royal served as a source of inspiration.

‘'There was so much excitement,“ said Gollender, who returned to the decrepit theater for the first time this week. "It’s crushing to see. It’s like seeing your grandfather die in a nursing home.”

When the theater opened in February 1926, it was the crown jewel of local businessman Joseph Stern’s circuit of about 20 regional theaters.

Stern bragged about the Royal’s cooling and heating systems, the marble staircase and the private telephone booths with parquet floors.

The theater was built in Italian Renaissance style and was capable of accommodating 500 people. A $40,000 Wurlitzer Hope-Jones organ was inside for live performances.

John Wright, 50, a truck driver who has lived in Bloomfield for most of his life, learned about the theater inside out when he was a teen.

In the late 1960s, Wright earned his first real paycheck as an usher at the Royal Theater.

While traveling the back halls of the Royal in his duties as usher, Wright says he saw the organ loft, ornate mirrors and detailed plaster moldings and knew the theater was special.

‘'We knew that this theater was a magnificent showcase when it was built,“ Wright said. "It’s a landmark, not an eyesore. There’s a big difference.”

The town purchased the theater for $500,000 using federal community development money in 1998 after Cineplex Odeon closed the Royal because of sagging attendance.

The theater was showing mainly urban action films and comedies before it closed, but it was once a popular destination for area residents to catch cheap family-oriented films.

‘'Back in the 1950s, it was the place to be seen,“ said Skinner, who remembers seeing her first Elvis Presley film there. "It’s heartbreaking to see it go.”

Wright said he would have loved to see the town keep the theater and use it to attract downtown visitors like Montclair’s arthouse theaters.

‘'A drug store is not going to bring people in to support the theater,“ Wright said. "The town doesn’t need to make money, just attract people.”

That plan probably wouldn’t work, according to the various studies commissioned on how to revive the downtown. The most recent study, issued in May and conducted by the Cranbury-based Atlantic Group, concluded that the theater’s land was needed for development to progress.

‘'We have to reinvent downtown Bloomfield and this is the first step,“ Kane said.

Red carpets, chandeliers and mirrors were part of the charm of the old movie theater that people in surrounding towns filled on the weekends, said Sinopoli, a longtime downtown merchant.

In recent years the single-screen theater became a twin that showed mostly films depicting urban life. Then, two weeks ago, it closed its doors. The message on the gold marquee, at 614 Bloomfield Ave., now reads: “Closed. Thanks for your patronage.”

``It’s sad. This theater is a township landmark,“ said Sinopoli, who has owned Lou Rocco’s Shoe Store, opposite the theater, for the past four decades. Once a popular venue for township families, the beige and brown movie house with its ornate architecture and single screen featured Western, family-oriented films that attracted large audiences from town and neighboring communities.

Officials at Cineplex Odeon, which is listed on the township tax rolls as the current owner, failed to return phone calls last week to discuss the theater.

``We don’t know what’s going on,“ said Bloomfield Mayor James Norton, who would like to see a new tenant join officials and merchants in a move to revitalize the theater as part of the redevelopment of the center.

The theater’s closing leaves only one movie house in the township. The Center Theater, about three blocks away, runs Indian films, some with English subtitles, exclusively.

Richard Bzdek, president of the Bloomfield Chamber of Commerce, said he was uncertain why Cineplex Odeon – which merged with Sony Loews 90 days ago – had closed its theater.

But the news came as no surprise.

Norton said attendance, as well as the quality of the films shown, had declined in recent years.

In recent years, the theater had presented some action- adventure movies. It was known for showing black action or comedy films depicting urban lifestyles such as “How to be a Player,” “Friday,” and “Menace II Society.” Other recent headliners were “He Got Game,” “Deep Impact” and “Caught Up.”

``Some of the films shown were not conducive to the quality of life we desire,“ said Norton, who added the theater attracted more out-of-town teens than residents.

``I stopped going a few years ago because I didn’t feel comfortable anymore,“ said Neil McGinniss, a township resident. "The clientele got rowdy.”

``It needs some personal attention and a facelift,“ said Sinopoli, who leases space for parking from the cinema group.

Fisrt movie theatre I ever went to; I must have been about four years old. The movie was something or the other about Santa Claus vs. Satan(!). Sad to see the old place is now a parking lot; I still pass through town occasionally and subconsciously look for the marquee of a theatre that’s been gone for five years now. One of the few subdivided theatres I’ve seen that still offered decent-sized auditoriums and screens after twinning, even though you were always aware that the place had been divided. One look up at the ceiling and you saw HALF of the elaborate designs—clumsily divided with a plasterboard wall down the middle of the original auditorium.

I stopped by the theater during demolition. The drop ceiling had fallen and the original proscenium and organ chambers were once again visible. They were in pretty good condition and quite ornate. It’s a shame the town let this one go.

The above article from 2000 has an ironic quote from a city council member. He claimed that demolishing the theater would help to “re-invent” downtown Bloomfield. You know what’s there now? An empty parking lot.

So much for progress.

Its funny, but in the late 90’s, when cineplex odeon was getting rid of some small non profitable theatres, they sold the Cranford, Union, and Millburn twins. All three of these theatre had problems ranging from leaky roofs to you name it. But the Royal was in almost mint condition. So what happens? The Cranford became a 5 screener, the Millburn was quaded by Jimmy Dolan and his band of pencil pushers, and the Union became a 7-plex. The Royal, the best of the bunch (and nicest) was left to rot, and as stated above become an ashpalt field, otherwise known as a parking lot.

I remember seeing The Godfather, Gone With The Wind & Saturday Night Fever for the first time at the movie theatre. I also remember going to see a Judd Nelson movie back in the mid to late 1980’s and sitting in the movie theatre by myself. The theatre was already sub-divided at this point. It saddens me to think that the theatre was eventually demolished. I wish the powers that be at the time had the forsight to appreciate the theatre and restore it to it’s former glory.

The usher in the newspaper article was correct. You need to hold onto unique features if you want to attract people. Some chain drugstore will not attract anyone. And you can locate a drugstore in many other places. There was nothing unique to the site that says “drugstore.”

Was that judd nelson movie The Breakfast Club?