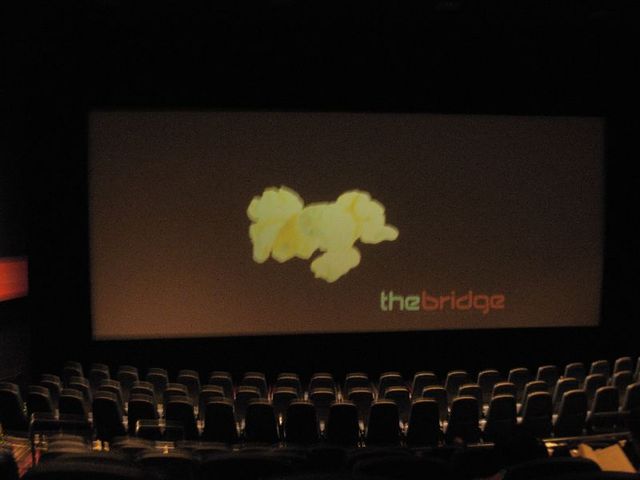 On November 8, 2002, National Amusements opened this six-screen cinema as the Bridge Cinema de Lux. The theatre is on the University of Pennsylvania campus. It was built on the site of the Eric 3 On the Campus Theatre. The Bridge auditoriums were designed with stadium seated, luxury seats, and the state of the art digital sound. It opened with a media room and WiFi connections.

It was taken over by Rave Motion Picture Theatres in December 2009 and was renamed Rave University 6 Theatre by May 2010. In June 2013 it was taken over by Cinemark. The Rave name was replaced with Cinemark in front of the theatre and it is now advertised as the Cinemark University City Penn 6. Signs with seat counts were posted for the first time in 2015 but reflect numbers since the theatre opened. Auditorium 1 (which is up a flight of stairs) has 114 seats, 2 has 136 seats, 3 has 256 seats, 4 has 234 seats, 5 has 203 seats and 6 has 236 seats. Auditorium 6 has the largest screen, a curved screen about 45ft wide (for ‘scope).

I’ve been there twice now since Rave took over operations, so here’s the play by play of what I’ve seen. Was here last night for “The A-Team”… and they’ve changed the exterior signage. Here’s a picture of the theatre with Bridge signage:

Now… replace “thebridge” with “rave”, in the same font, take down the Cinema De Lux bit, and that’s what it looks like now. It looks BIZARRE and not at all like what I thought they’d put up there. More interesting, at some point after that picture was taken they put up a sign saying “RESTAURANT AND BAR” under “thebridge”. That’s stayed, so it looks all the world like this theatre is the “Rave Restaurant and Bar”. Since the decor is really subdued anyway you’d be hard pressed to tell there’s a theatre here if not for the poster cases.

Inside, the tickets/uniforms/bags/box office screens all say Rave. However, “The Bridge” was plastered over every conceivable surface when this place was built, and they haven’t changed those signs yet. Given what they did with the sign I’m curious to see what they do with the interior here. Preshow was what they were doing under NA: blank screen, 30s music. On my first post-Rave visit, they were running the NA exit trailer and rolling stock ads; last night they just ran trailers. No policy trailer as was standard for this venue.

12 Lounge has been closed both times I’ve been here. The first time, there was a sign stating it was closed due to a “system change”. The second time, it was just blocked off. The weird “media immersion room” was turned off last night though it was running the first post-Rave visit. And testing out movietickets.com, they’ve also stopped reserved seating. They were only doing that on Friday and Saturday anyway.

So it seems like Rave is focusing on just theater operations right now. We’ll see what they do with it.

That sucks – what you mentioned above: the Media Immersion Room, lounge, atmosphere and directors halls made this a really cool place. I agree with Sheri Redstone’s position on making movies more of a social event as a means of appealing to a more upscale market, and it’s worked for them.

The Bridge created a vibe, which Rave doesn’t get: they’re taking a first rate sophisticated take on the neighborhood multiplex and making it fit the mold of one of their boring neon multiplexes.

After a rocky start, The Rave will come into it’s own. Maybe they will convert the resturant into an IMAX theater. I was impressed with the management on my 7/9/10 visit. At a screening of Preditors, a creatinous patron became unbearable, loud solo talking at the screen. He was “escourted” out by management. The bathrooms are now well stocked with papergoods and consessions are sold at a resonable price. The problem I have with this theater is one I have all multiplexes, continuious sneeking into auditoriums, this is disturbing, and recks the flow of the cinema experience along with the blue lights from cell phones.

Picture with the new signage….eww:

Ewww indeed! At least they didn’t go that tacky at the other former “Bridge” in LA.

I would like to thank the management of the Rave at University City 6. I went in the early evening to see The Hangover Part 2. After buying a ticket and sitting down, I noticed the crowed on it’s way to see it, I could tell I would have difficulty ejoying the film with that group. After I saw someone bringing in what looked like a newborn baby, I got up and got my money back, they gave it to me with no problem. The audience looked like the type that would not cotton to anyone telling them not to talk on cell phones. So, I ended up at the Roxy, I can only go to the Rave UC 6, only in the afternoon.

The Bridge Cinema De Lux was one of many projects designed for National Amusements by the Philadelphia architectural firm SPG3. There are two photos on the firm’s web site.

Masking aka matting screens is no longer being done this year, having sometimes not been done last year. Auditoriums 1 thru 5 are set to “flat” which means “scope” screens are letterboxed horizontally. Auditorium 6 is set for “scope”

Has returned to original opening policy of reserved seating!