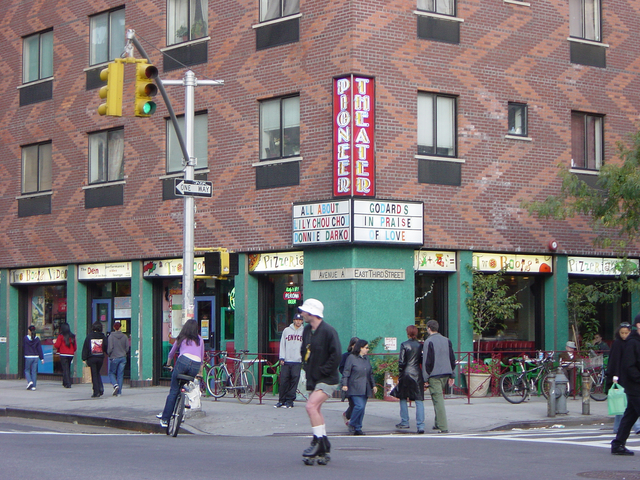 Opened in February 2000, this little theater in the East Village was surrounded by a video store and pizzeria, which were all owned by the same company. Specialized in independent films–particularly of the punk rock variety. Very small but charming screening room. The Pioneer Theater closed on November 7, 2008.

The Pioneer Theater opened in February 2000. The first film shown was the documentary The Blank Generation.

It pains me to write this, as I am the Gena H. who contributed the original description, but Pioneer Theater is closing following Halloween. There will be a party to remember this great theater in November. Check their web site for more details. Another Lower East Side casualty. New York is losing every last bit of fun it had.

I wasn’t the biggest fan of the Pioneer as a movie theatre (I generally hate anything small boxy theatres with no ambiance) but they had some of the best alternate programming I’ve ever seen. I’d love to run a theatre like it in Los Angeles, if I had deeper pockets and a better space to do it in.

I kind of got the idea that this theatre never did that well. The fare always seemed to be too obscure, even for New York.

I too was a frequent patron of the Two Boots Pioneer theatre since 2004 and I will certainly miss it when it finally closes after tomorrow’s farewell party at 6PM, which I will be there. In my opinion it was the best independent little single movie theatre in NYC and it was a miracle that it lasted almost 9 years since it’s opening in 2000, when it was not economically feaseable to open a new single movie house in this era of multiplexes. It will certainly leva a void in this area and that leaves only the Ziegfeld and Paris theatres as the only single movie theatres in Manhattan.

Edward, I think the Pioneer was more a product of gentrification than a victim of it.

Once the Sunshine on Houston re-opened it made this theatre even less viable for the newbys.

So what has become of Two Boots' basement now that the theater is closed?

I used to see a handful of films here a year and while the site lines were atrocious, it booked films that almost certainly wouldn’t have otherwise received theatrical distribution in New York City. They used to change the films each week and the films that played here didn’t play in any other theatre. They also occasionally showed revivals. Because the films came and went on a weekly basis, I often missed films, thinking that I’d catch with them on DVD. However, several films that played here that I missed & wanted to see were so independent that they never made it to DVD.

A few things to note about Pioneer. One, the theater rarely made money, this was much more a labor of love and an advertising/promotional thing than it was a for profit theater. The owner of Two Boots/Pioneer was Phil Hartman, not the actor. He kept that theater afloat partially due to his love of movies and because his restaurant across the street and the pizza place/video store above made enough to support the theater.

I knew two of the programmers, Ray and Leigh (Lee?), and both were incredibly nice to me and my girlfriend. Possibly because many times we were the only people in the theater, but that still didn’t mean they had to be nice to us. One time Ray invited us to bring our dogs by to run around the audience during a werewolf Halloween marathon to do a little William Castle-esque scare tactic. What basically happened was my dog went and found the food some customer snuck in and ate it all!

I saw some AMAZING films there, including my first viewing of The Last Picture Show with Peter Bogdanovich there for a Q&A, The Warriors (before it was a regular repertory film), Donnie Darko (The Director’s Cut) which played there midnights for what seemed like forever, and many rare, old, foreign, indie and horror films no one has ever heard off. I also saw some amazingly god awful stuff, but that was just part of the risk of seeing something made with no money, or no promotion, or even no story!

I cannot tell you how many times we hung out with people there, friends, actors, directors, and other fans of film. Judah Friedlander would show up sometimes, Larry Fessenden was there every week or two it seemed, and tons of guests would show up for Q&A’s and parties. Sometimes free pizza was even supplied!

As others have noted, this place was not a money maker, and gentrification did not kill it, at least the way it did so many other places. Two Boots, their first restaurant, was there before many other places, when the neighborhood was still considered bad by many people. Those of us that were there during the not so great times did not view them as the enemy, as we do most of the newer places now.

For a while the theater also ran The Den Of Cin, which you entered from the pizza place by taking stairs to the basement. There they showed some really cheesy films on a screen which was projected by a pretty terrible projection device, something you could buy for your home in the 1990s. I think they mostly showed VHS and DVDs from the rental place upstairs. They did that once a week and always had free pizza and it was cheap, like $5.

I could go on and on, but I will stop for now. It’s always sad to see a neighborhood place close down, and a movie theater at that.

@hardbop, mp775 is correct, it was the Loew’s Hollywood that was on Avenue A between 6th and 7th Street. He posted the link to this site, so here are a couple others with some pics to boot:

I was lucky enough to get into that theater before they tore it down, one day I might even post the pics we took!