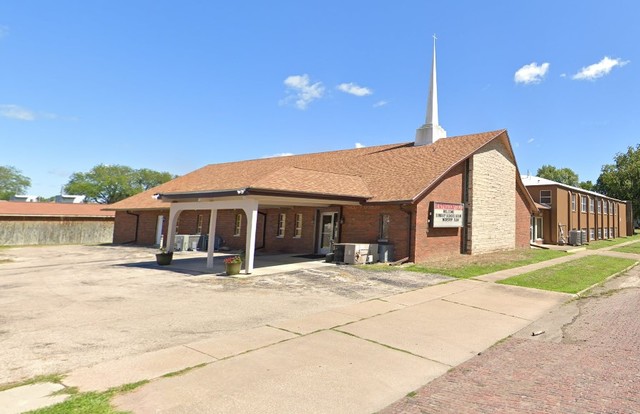 Opened in 1943, the Grove Theatre was located on N. Kellogg Street at E. Grove Street. It was closed in March 1960 and became a church. Today it is home to a Salvation Army community center.

The Grove opened in about 1941 and was the only movie theater outside the downtown business district ever to exist in Galesburg to my knowledge. It was a nice little art deco house seating perhaps 400-500. It was one of the principal independent theaters in a high-profile suit in about 1947 against the studios/chains for the right to show first-run movies, which it did for sometime after that. It has not been a movie house since probably the early ‘60’s.

Cinematour has this theater listed as demolished, but the church shows up in the town listings. The Googlemobile has not made it to Galesburg yet, unfortunately.

I’m from Galesburg, and wish I could provide more info. My father, a b-movie enthusiast, and my stepmother used to go there a lot in the 60s – it was the only theater in the area to show b-movies and exploitation films aside from the Galesburg Drive-In for quite some time – my stepmother in particular remembers seeing “Them!” there, and my father remembers seeing a couple of different early “splatter” films there. It closed officially in – I THINK – 1972. I know for a fact that it was a movie house until at least 1970. They did used to show films that the Orpheum and the Twin West, Galesburg’s other non-drive-in theaters at the time, wouldn’t show.

Dec. 7th always brings the Grove to mind. I was ten and was at the Grove with a slightly older friend, Clarence Highlander. The projectionist stopped the movie and placed a hand written note in the projector with the news of the attack on Pearl Harbor.It was still open twelve years later when my girl friend and I would go there.

Theater isn’t a church, it’s a Salvation Army community center. The front has been totally redone (looks ‘70s-ish), and entry is now through the side, which has lots of added windows

The Grove Theatre closed in March of 1960 and was converted to the Congregation of the Calvary Assembly of God Church.

This theatre was made famous in the trades as the feature of a story in Fortune magazine, Aug. 1948 issue. An article about that article appeared in Boxoffice, 7-31-1948. The Fortune article was titled “What’s Playing at the Grove?"and was about the problems of a typical small town theatre. The article profiled Weldon Allen, who was the owner-operator.