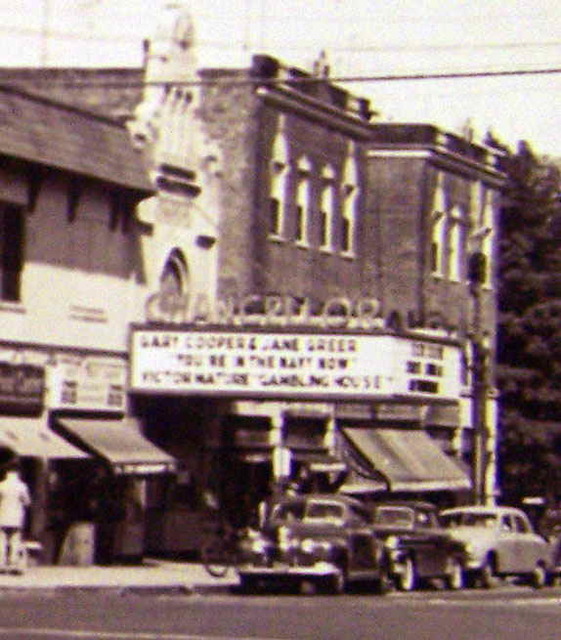 Opened by the Bratter-Pollak circuit on September 25, 1928 as either Roxe Theatre or Roxy Theatre. It was decorated in an Atmospheric old English style. It was equipped with a Wurlitzer 2 manual, 7 ranks organ. There were lawsuits taken out by Sam (Roxy) Rothafel over the use of that name and in 1929 it was settled and the theatre was renamed Rex Theatre. On August 11, 1930 it was taken over by RKO. It was a neighborhood house which had constant trouble with poor acoustics. Taken over in the early-1950’s by Eddie Steinberg who solved the sound problems and corrected some poor sight-lines. It was renamed Chancellor Theatre remained successful well into the 1970’s when changing demographics and booking policies spelled the end of a great theatre.

In the mid-‘70s the condition of the building was poor – i.e., peeling walls, and a faintly dim light bulb in the center of the ceiling that remained on throughout the film, which illuminated the fading surroundings just enough to be disconcerting. Once when I was riding in a car with my older brother and a friend of his I started complaining about the Chancellor, the mice underfoot, etc. My brother nudged me and sternly said, “His dad owns it!” But his friend laughed it off, as if saying, “None of this is news to me!”

My Father says that he use to see live shows there in the late 40’s early 50’s.It is my understanding that it was the Rex. One of the stars of the show was a young Jerry Lewis.
Here is a link to a photo
View link

I grew up in Hillside close by the Irvington border and in addition to the Mayfair in Hillside, I went to the Sanford, Castle and Chancellor theaters in Irvington. I remember seeing “Goldfinger”,
“Fail Safe”, and “A Shot In The Dark” with Peter Sellers. The last
pic I ever saw at the Chancellor was “Last Tango In Paris”. I was a
senior in high school and a bunch of us went to see it. We all thought it was the biggest piece of crap we had ever seen.
The thing I remember about the Chancellor was that it was always closed during the summer—I don’t think it was air-conditioned.
Strange place.

Listed as open in the 1944 FDY as the Rex. Listed in the 1961 FDY as as the Chancellor and part of Triangle-Liggett Theatre Service.

This was my neighborhood theater and it truly was a dump. I think about 2 people ran the entire operation. And no air conditioning so it was always closed for the summer. Saw a double feature of The Godfather and Bananas and spent nearly 5 hours in The Chancellor’s uncomfortable seats hovering over super sticky floors. Never any problem getting into “R” rated movies as the ticket lady was about 90 and couldn’t see too well.

Are we sure it has been demolished? The building at 750 Chancellor Avenue in the Google satellite view looks very much like a theatre on the side of the building, although the front looks like it has had a new facade installed to blend it with the building next door.

750 Chancellor would be part of the vacant lot at the southwest corner or Chancellor and Union Avenue, just east of Michelle’s Caribbean-American Restaurant, which is at 754 Chancellor.

The Chancellor was originally opened on September 25, 1928, by Roxy Theatrical Enterprises, Inc. of New Jersey. Their original intention was to name the new theatre the Roxy, but it may have opened as the Roxe.

The change in name was due to a complaint by Sam (Roxy) Rothafel and the Roxy Theatres Corporation of New York, who took issue with the name Roxy, both in the corporation and on the theatre. The New Jersey company then changed the name to “Roxe”, if this happened before the opening or immediately afterwards is not clear. The Motion Picture News carried 3 items: on September 1st that the Roxy in Irvington “will open its doors shortly”, the September 29 issue carried an item that the “Roxy Theatre, Irvington N.J., opened last Tuesday”. The following week (October 6), it ran a longer article about the opening, referring to it as the Roxe. A final mention came in the November 14 issue of Variety. This short piece announced that the owners had changed the name from Roxy to Roxe, which did not satisfy Rothafel or the New York corporation, who had filed suit in the local U. S. District Court to restrain the New Jersey corporation from using the name Roxy or Roxe, citing the trademark “Roxy” was protected.

The suit was finally settled in the spring of 1929. According to an item in the May 8 issue of Variety, Rothafel himself showed up to testify “for his house and his right to the name Roxy”. Both parties agreed that the Roxe would be renamed Rex. It was still being listed by that name in the Film Daily Yearbook at least as late as 1955.

The October 6 MPN article mentioned above gave a little information about the theatre itself: it was done in atmospheric old English style and seated 1250. It also had a stage suitable for vaudeville, the booth had twin Simplex machines equipped with sound attachments. Another feature of the house was its Wurlitzer, opus 1885. This was a 2 manual EX style console with 7 ranks, installed on May 29. Records from Wurlitzer give the install location as the Roxy Theatre in Irvington, N. J.

When it opened, this theatre was part of the Bratter-Pollak circuit. In 1930, B-P sold their New Jersey theatres to RKO, who took control of them on August 11.