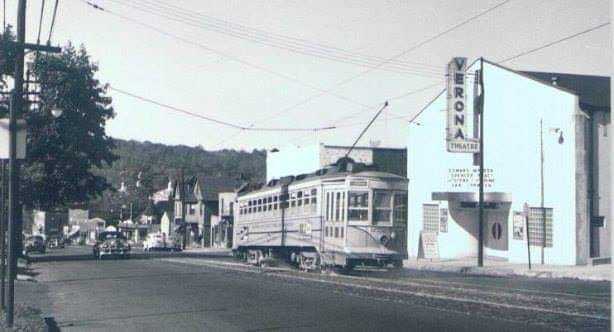 A small neighborhood house on the “Bloomfield Avenue run” which opened on November 19, 1947. Lost its run status with the advent of the mall multiplexes. Closed and converted to office space sometime in the 1980’s.

Note, the name of this theater was the Verona, not the Verone. Also, it did not close in the late 1970s because the only film I ever saw there was Harry and Son which was released in March of 1984. I believe it closed shortly afterwards.

The Verona had a cozy neighborhood-theatre feel to it. The flipside was that you wouldn’t want to see “Lawrence of Arabia” or “Star Wars” here—the screen was not ‘scope width and was not even vertically masked to accommodate a 2.39:1 aspect ratio, so any movies with an aspect ratio wider than 1.85:1 were simply chopped off at the sides.

Listed in the 1961 FDY as part of Triangle-Liggett Theatre Service.

Listed in the 1956 FDY as part of Independent Theater Service, Inc.

1969 ad (bottom left for The Graduate) courtesy of Bill Huelbig:

Were these old movie theatres really as wonderful as we remember, or do we just view them through a veil of nostalgia? Well, I think they were. Modern multiplexes are huge, sterile and corporate. Older theatres, certainly the small town ones, even if they were part of a chain, really were community and family oriented. The Verona Theatre was a case in point.

I lived in Verona between 1962 and 1965, between the ages of 5 and 8. The Verona Theatre was the second movie theatre I ever knew, it was the cinema of my childhood. It was a time and place when no one worried about a 6 or 7 year old walking the several blocks to the theatre on their own on a Saturday afternoon. And there was always something to see at the Verona on a Saturday afternoon. I didnâ€™t realize it at the time, but looking back now I do, but the Verona deliberately programmed that long-vanished tradition – the Childrenâ€™s Matinee. Films such as â€œFirst Men in the Moon,â€ â€œThe 7 Faces of Dr. Lao,â€ â€œAtlantis the Lost Continent,â€ and â€œThe Three Stooges Meet Herculesâ€ were featured on the bill. Stuff that kept a child joyfully entertained throughout an afternoon.

Not that the Verona was beautiful inside. The auditorium walls were coated with heavy brown paint that was chipped and peeling. The lobby was better with off-white wallpaper and a pale green carpet, but there was no refreshment counter. All they had was an ancient soda machine from the 1940s, the kind where (for a dime) you could see a cup drop down and watch the syrup and carbonated water mix before your eyes. (It also had the unique feature of allowing you to mix flavors. I thought I had invented the idea of mixing Coke and cherry flavorings!) The only snacks they sold were small boxes of stick pretzels, also for a dime. These were dispensed by an ancient usher in a maroon jacket with faded gold trim.

Still, the Verona was a cozy place. And as I say, it was community oriented. Every Halloween they would hold a costume contest. The participants would get up on stage and the winner would be determined by audience applause. I participated one year in a Robin costume (as in â€œBatman andâ€¦â€) my mother had made me. I lost to a pretty young girl in a cat suit. (Hey, I would have voted for her too.) But does any theatre hold events like these any more? I doubt it.

In 1965, we moved from Verona to the nearby town of Nutley. I didnâ€™t return to the Verona Theatre for a couple of years. When I did, I was astonished and pleased that money had been spent fixing it up. There was now a snack bar in the lobby selling popcorn (in the traditional red & white striped boxes), candy & soda. The auditorium walls had been covered with expensive press-patterned white wall paper. Illumination came from frosted glass flambeaux with rainbow-colored edges. And white, octagonal fountains stood in front of the stage, one on either side. Just inside the right-hand door to the auditorium a little partition blocked the rear row of seats from the aisle. Which meant anyone sitting there couldnâ€™t be seen by most of the audience, making it a great place to snuggle up with a date. There was also a tiny balcony upstairs.

During the late â€˜60s and early â€˜70s I saw any number of films at the Verona: â€œDiamonds Are Forever,â€ â€œLove Story,â€ â€œThe Omega Man,â€ re-releases of â€œThe Green Beretsâ€ and â€œThe African Queen.â€ The last film I ever saw there was Woody Allenâ€™s â€œZeligâ€ in the early 1980s. Soon thereafter the Verona Theatre closed and was turned into an office building.

I miss it still.

This was a enjoyable neighborhood theatre. Growing up in Glen Ridge and currently living in Montclair – I saw many a movie here at the Verona Theatre. I miss it as well.

The Verona Theater was Built by John Geyser in 1947 an operated by his Family until remodeled to its current use as an Office Building in the late 80’s. At Janets 50th High School Reunion we heard in person about those first date and cuddling in the Balcony stories.