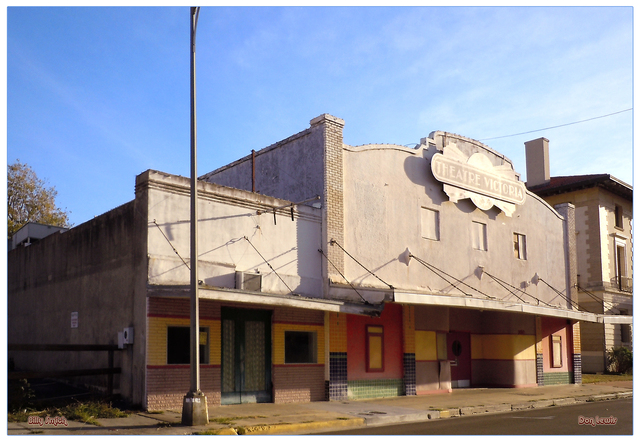 The Victoria Theatre reopened following refurbishment on August 8, 1941. Closed in 1960, it reopened in 1961 screening Spanish language movies. It screened adult movies in 1971-1972. Then back to regular movies under Frels Theaters again until 1985. In 1986 was taken over by the Victoria Community Theatre group and went over to stage productions, known as the Theatre Victoria, they moved out of the building in 2004.

A three manual Hope Jones/Wurlitzer theatre organ console was recently purchased for installation in this theatre in the near future. It is due to arrive in Victoria sometime in late October of 2005.

The Pipe ORgan console has arrived, nd work will start on the organ chambers in the near future…. after Frels Pipe Organs completes 3 other jobs in progress.

Here is a February 1965 ad from the Victoria Advocate:
http://tinyurl.com/ll5rzy

This theater was previously the Electra Theatre. According to the July 18, 1924 Victoria Advocate, M.M. McNeese of Dallas purchased the Electra from Victoria resident Edwin Jecker. He renamed it the Victoria and reopened it on July 24, 1924. The opening feature was Gloria Swanson’s “Manhandled”, which opened to an overflow crowd.

The Electra had been open as early as 1912. An ad in the October 2, 1912 Advocate announced that Florence Lawrence’s “The Mill Buyers”, Edgar Keller’s “The Garrison Triangle”, and “Ferdie’s Family Feud” with John R. Cumpson and Vivian Prescott could be seen at the Electra.

From Victoria Texas a photo of the Victoria Theatre.

Just to add a bit to the above:

The Electra Theatre launched July 4, 1911 with photoplays in downtown Victoria. At the end of a ten-year lease, the Electra closed. In a little over a year, the venue would have five operators and three different names.

The operator of the Queen Theatres in Cureo and Yoakum, Texas, E.H. Peters of Dallas took on the Electra in 1921. On May 4, 1921, he rebranded it as the Queen Theatre with an Air Blizzard cooling system. Peters offers $5 in gold to the student who could best describe the Air Blizzard system. Peters sold out that October to new operators who sold to new operator F.S. Ferguson of the Princess Theatre that December. On January 20, 1922, he renamed the theatre the Royal Theatre

Ferguson closed the Royal Theatre and, under new operators, the theatre relaunched under its former Electra Theatre moniker on December 21, 1922. That lasted until M.M. McNeese of Dallas bought the theatre and converted it the Vicotria Theatre on July 24, 1924 likely on a ten-year lease. Under Frels Circuit operation in 1926, the theatre was equipped with a giant lit sign reading, Frel’s Victoria. On September 15, 1929, Rubin Frels installed a sound system for talking pictures. The adjoining Post Office Confectionery Store was a favorite pre-show stop for patrons beginning in 1934.

Later that year, the movies stopped and the venue was used for live wrestling and other live events. Frels left after a 10-year lease and the space became the Norge Shop and other retail interests.

Frels returned to the Strekfus Building installing a massive 35-foot high sign in place and back under the name of the new Victoria Theatre. The building contained half of the old theatre and a completely new half. Frels launched the 400-seat Victoria on August 8, 1941 with “Mr. Smith Goes to Washington.” The theatre closed at the end of 1960 and perhaps under new operators on a sublease, it relaunched as an Hispanic Theatre in November of 1961. Despite surviving Hurricane Carla in 1961, the Victoria Theatre signage was finally felled by high winds in May of 1965. But the theatre continued operations.

Under new operators in 1971, the Victoria Theatre became an adult films house through 1972. It was then an Hispanic house back under Frels from 1972 to 1985. In 1986, Frels Realty allowed the space to became home to the Victoria Community Theatre under the name Theatre Victoria doing live shows through 2004. They moved to a new location that year.

How did you come across this information? I’ve recently gotten a pre-remodel photo. Would appreciate it if you could help me