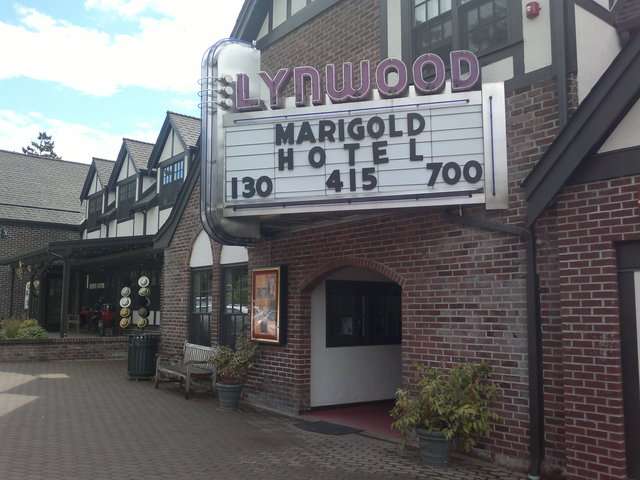 Edna and Emmanuel Olson, a hard-working couple who lived in the Tudor-style house on the hill overlooking Lynwood Theatre, built the structure across the street known as Lynwood Center. The 315-seat Lynwood Theatre opened on July 3, 1936 with the musical comedies “Times Square Playboy” and “She Couldn’t Take It”.

In the 1950’s the Olsons sold the business to nephew Glenn Nolta and his wife Lucille, who ran the theatre until 1980 when current owner Sam Granato bought the business.

1994 brought improvements to the old theatre - a new surround sound system and a bigger popcorn machine (the original Manley machine holds a place of honor in the lobby), for a start. A new concessions stand keeping the Art Deco style, an enlarged lobby, and brand new auditorium seats made the old Lynwood Theatre shine as proud as she was on July 3, 1936. In 1997 new projectors replaced the old Sears Motiographs which had provided solid reliability for 50 years, and the new screen now makes images cleaner and brighter than ever.

The Lynwood now has an Organ of it’s own. We purchased a Conn 652 and used it in January with a screening of “The Gold Rush” staring Chaplin. It sounded great and now makes it easier for us to do a wider variety of programing.

Lynwood Center is in the process of getting much needed renovations. The building has a new owner who is rebuilding the 80+ year old structure to include new wiring and other upgrades. The theater will remain unchanged only receiving new wiring and other out of sight improvements. (plumbing foundation work etc.) This will bring the building up to code and keep it around for another 80 years.

Renovations at Lynwood Center are coming along with the sidewalks expanded and the parking is much improved. We have a newly paved lot on the east side and another on the west as well as parking all across the front of the building. The new owners of the building are commited to bringing this place back, and making sure that it will be around for generations to come.

I have no idea where the 75 figure came from for the seating capacity, but the theatre has 260 seats. Originally it had 450 but when it was reseated the new seats were wider and the rows were spaced farther apart to give more leg room. Also the new concessions stand and office was built into the back wall of the auditorium eliminating about 4 rows.

This July 5th we will be celebrating 75 years of entertainment.

The theatre is getting ready to celebrate 75 years on July 3rd. We will have Dennis James play our house organ to the silent classic “Phantom of the Opera” along with some other yet to be finalized festivities. I will post more when the details become final.

Multiple generations of my family worked in this theatre over the years. I managed it for a short time. My oddest memory was of a cranky nurse who rented an apartment in the same building, above the theatre. She would get up and come by and ask me to turn down the sound! It struck me as really odd that someone who worked an early AM shift chose to rent an apartment room that shared a wall with the theatre’s screen.

The Lynwood is now digital, we switched about 6 months ago and I have to say it has been great. The flexability is amazing. so much easier than film. I loved film but now that I’ve used this new equip. I don’t want to go back. We have NEC NC1200C proj. with GDC server and full digital 5.1 sound. Picture and sound is great!

If anyone knows how to change the seating tab at the top of the page the Lynwood has 260 seats.