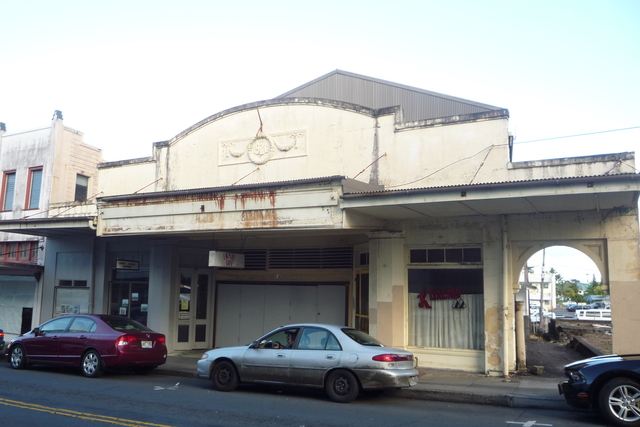 I photographed the Empire on October 21, 2008. It dosen’t appear to have much going on. The Empire Cafe appears to be closed.

Armory Hall was opened as a 500-seat venue on February 22, 1905. In 1908 it was renamed the Empire Theatre located at Front Street below Church. In 1909 it was refreshed for improved moving picture presentations. Likely at the end of 15 year lease, the Empire then moved to its Haili Street location in 1920 seating 800 patrons and built by Y. Yanagistubo.

Just one year later, in 1921, the (new) Empire was remodeled to the plans of Solomon F. Kenn with screenings moved to to the Yuraku-Kwan. The (new) New Empire then re-emerged slightly larger at 845 seats. When the Palace opened, the Empire became a second-tier theater. However, to remain relevant, on October 9, 1929, it added Vitaphone and Movietone sound systems showing “The Voice of the City.”

At the end of the 1930s, the theatre catered to Filipino and Japanese audiences once a week. The Empire ended its run on May 26, 1940 with Hideo Fujino in “Haha Wa Tsuyoshi” likely at the end of a 20-year lease. In March of 1971, the building collapsed and the facade and much of the building was demolished.