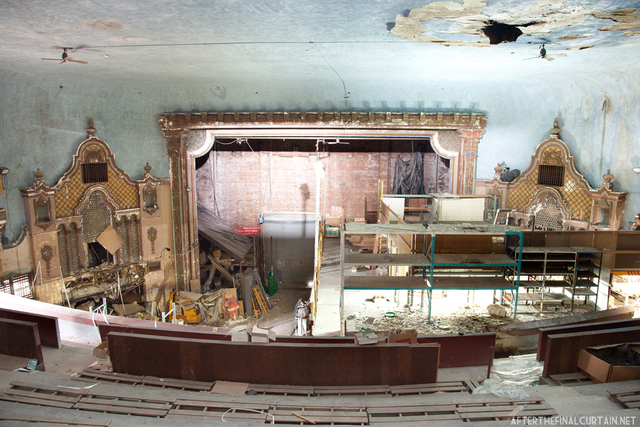 Built on the site of the former St. James Episcopal Church, the Broadway Theatre was opened August 1, 1912 with the pre-Broadway(New York) try-out of “The Girl from Montmartre” starring Long Branch resident Richard Carle and stage performer Hattie Williams. The theatre also exhibited silent movies such as “Birth of a Nation”, “Ben-Hur” and “Phantom of the Opera” The Broadway Theatre was built by Walter Rosenberg (who later became Walter Reade). It was closed in 1930 with the Fox talkie feature film “The Sky Hawk” starring Helen Chandler.

The interior was dismantled and a new interior was constructed in an Atmospheric Spanish-Morish style designed by local architect Leon Cubberly. It reopened as the Paramount Theatre on January 16, 1931 with the Paramount movie “The Gang Buster” starring Jack Oakie.

Lasting only 28 years, the last three years of operation saw speciality “Roadshow' prints of "Around the World in 80 Days”, “The Ten Commandments” (anamorphic wide-screen print) and “South Pacific”. The Paramount Theatre was closed on September 1959 with “Darby O'Gill and the Little People” and “Cast a Long Shadow”. The theatre was to resume operation in 1960 with the last exhibition of “The Ten Commandments” on June 8, but this never happened.

In June 1961, Walter Reade Jr. announced the Paramount Theatre would be demolished. This too never happened. It was planned to reopen in June 1965 after the installation of 70mm stereo projection and sound and later planned to install a Cinerama three strip & single strip system with a curved screen. Again, none of these occured.

In 1975 plans were considered to glass enclose the balcony and have meals served from a restaurant to be installed in one of the adjoining stores. The theatre would have live productions and film, with a curved screen being lifted into the fly-tower during live performances. The Greater Long Branch Arts Council(defunct in 1999) demonstrated the possible restoration of the theatre in 1998 as a live theatre & cinema. Obstacle to this was the ownership of the building which by 2004-2005 was enthusiastically accepted and progress began. Broadway Arts was formed and plans and designs drawn up for a complete renovation of lower Broadway, with the Paramount Theatre restored and the Strand Theatre across the street to be used for live productions. Broadway Arts folded and the Strand Theatre was demolished. In the meantime the Paramount Theatre had been in use as a store by Siperstein’s Paints until they vacated it around 2011. The Paramount Theatre was demolished June 12, 2017.

Who can be faulted for the creation of desolation row at lower Broadway? I leave it up to the reader and/or citizens of Long Branch and Monmouth County.

Good thing it’s being restored! See a hi-res scan of one of the postcards from above, featuring Reade’s Strand and the Paramount across the street, from 1939, in my Flickrstream:
View link

I just found the following on the c.t. page for the Paramount in Asbury Park (theatre #222) concerning this Paramount in Long Branch.

“The Paramount Long Branch was also used for test exhibition of Cinemiracle and WINDJAMMER. The film was eventually exhibited at the St. James in July 1959. posted by on Dec 7, 2006 at 2:25am”

Does anybody know anything more about this? The film was also scored and tested in late 1957 at the Mt. Edens in the Bronx. Thanks.

It is my understanding that work on bringing it back to a theatre is going at a snails pace. Lets hope it gets done in the next 2 to 3 years.

I believe the architect was Leon Cubberley.

I don’t think they are restoring this theatre anymore, place is in such terrible shape and no work had been done since the closure of the paint warehouse.

Damn you sipersteins! I highly doubt renovations will ever take place there.

In 1960 WRLB (Radio Long Branch) 107.1 signed-on from studios on the second floor, since moved to Neptune under new owners. On April 21, 2014 a man jumped or fell from still-used 384-foot tower behind the building. Newspaper story said neighborhood is “blighted and ready for large-scale urban redevelopment.”

The Broadway Theatre is listed in the 1914/15 American Motion Picture Directory at 135 Broadway. That would make it across the street from the Paramount and likely a previous name for the Strand. Anyone know the truth behind this?

1953 photo added. Members of a civic group opposed to burlesque shows picket the Reade Paramount Theater on June 28, 1953 in Long Branch, N.J., to protest the opening of the theater for burlesque entertainment. The opening show went on as scheduled. (AP Photo)