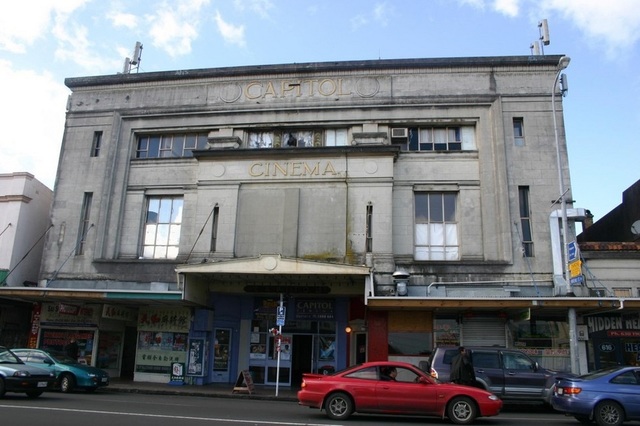 The Capitol Cinema opened in 1922, and at that time was the most luxurious cinema in the suburbs of Aukland -in this case here at Balmoral.

The Capitol was my local cinema as a kid - it has a large floating screen installed following a fire which claimed the original proscenium. The Capitol was converted to a circle only operation in 1987, by local businessman Charley Gray (who promptly named the cinema after himself!). The seating capacity was now provided for 216 patrons. The projection room was moved upstairs and a large screen installed at the front of the circle, leaving the stalls area for use as a climbing and activity centre.

I believe that another art house operator took over after Charley’s demise, followed by a Bollywood operator.

This theatre is protected by the New Zealand Historic Places Trust with Grade 1 classification.

Sad that in New York we can’t save any theatres :(

All the remining vintage theatres around the Auckland area are all protected heritage buildings. The current mayor Dick Hubbard wants them all to be preserved for future generations.

The Capital is OPEN and has been continuously for a number of years. It currently screens subtitled Bollywood films though has also recently hosted the Date Palm Film Festival (middle eastern films) and has also shown some screenings of the incredible film festival. The current operator has upgraded the seating and speaker system and the building now sports cell phone signal repeaters on its roof.

current listings for the capitol are available on the web at -
http://www.capitolcinema.co.nz/

My father is Charley Gray who owned and operated this cinema in it’s ‘Charley Gray’s’ capacity. I would love to speak to anyone who has any documentation/information or better still, any remaining signage/insiginia etc from the cinema.
Charlotte Gray

Here is a link with loads of information from The Auckland City Council files showing plans, photos and detailed history:
View link