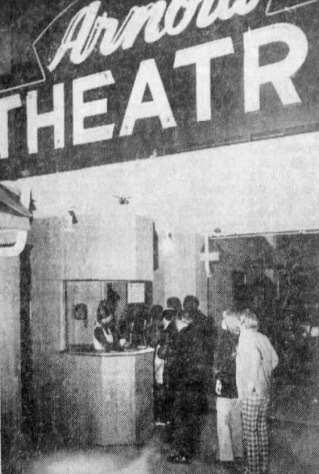 One of the few independant theatres in the Monmouth/Ocean County area, the 750-seat Arnold Theatre was opened in 1935. It was the prime destination for the kids of summer vacationers on rainy summer afternoons. It was closed as the Arnold Cinema on February 19, 1981 and had a brief period as a church. It reopened as a live theatre from 1982 until August 1984. Converted to office space in the mid-1980’s.

The converted building is located at 802 Arnold Ave.

Harry May built a new theatre at Arnold Avenue G.O. Jones was the architect. The theatre appears to have launched in 1935 and had 750 seats. In its formative years, the Arnold was a summer only operation closing in the winter after the vacationers had left. One vacationer was cowboy sidekick Gabby Hayes who made a live appearance selling out the theatre.

The theatre closed in 1957 and was a Walter Reade Circuit property. The theatre appears to have a period of vacancy and was brought back with live shows in the early 1970s on a sublease with Reade. On January 11, 1974, the theatre got back into regular theatrical operation with the film, “The Way We Were.” Robert W. Buhout received the Citizen of the Year Award by the Elks Club for his purchase of the operation from Reade and his restoration of the facility.

The theatre was renamed the Arnold Cinema by James H. Clayton and closed February 19, 1981 with “Ladies and Gentlemen, the Rolling Stones.” It had a brief run as a place of worship. Live theatre producer Gil Rambach took on the facility for live plays in 1982 listed at 500 seats. That ran until August of 1984. The building got a shocking makeover and was transformed into the Cedar Point Office Center, an office building.

Here is an interesting Facebook post with photo about an unfinished theatre at 109-113 Richmond Avenue, that was converted into Acme Food Market. Two 1937 & 1939 news articles in the comments. Today that site is a Five Fitness.