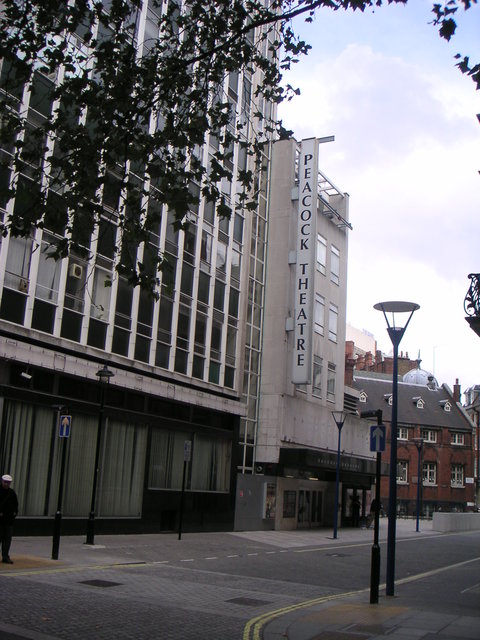 The site at Kingsway & Portugal Street was originally where Oscar Hammerstein’s London Opera House had stood. This was a magnificent theatre built in 1911 that seated 2,420 and operated during the 1920’s and 1930’s as the Stoll Picture Theatre and later Stoll Theatre, which closed in 1957 and was demolished in 1958.

The Royalty Theatre opened on 23rd June 1960 with the famed American actor/actress duo Alfred Lunt & Lynn Fontaine starring in “The Visit”. It was the first West End theatre to be built since the Savile Theatre on Shaftesbury Avenue in 1931. Designed by the architectural firm Lewis Solomon Kaye and Partners, it occupies the basement of an office block. However, the replacement Royalty Theatre was not a great success, where the previous Stoll Theatre had a prominent position on Kingsway taking up an entire block, the entrance to the Royalty Theatre had been moved to around the corner to the narrow Portugal Street and had no ‘street presence’ on the main Kingsway thorough-fare. Also it was considered just a litle off the beaten track from the rest of the major West End theatres. Seating was provided in the Royalty Theatre for 689 in the stalls and 288 in the circle, both these seating levels are beneath ground level.

In 1961, MGM/Loew’s took out a lease on the theatre and transfered the run of their blockbuster film ‘“Ben Hur” into the Royalty Theatre. This was due to the refurbishment they were carrying out at their main cinema, the Empire Theatre, Leicester Square. Following a run of “Mutiny on the Bounty” the Royalty Theatre was equipped for screening Cinerama movies and became London’s third Cinerama theatre (the others being the Casino Cinerama and the Coliseum Cinerama). The Royalty Cinerama Theatre only premiered one Cinerama film “The Golden Head” and was used the rest of the time as a Cinerama move-over house. Cinerama films ended at the Royalty Theatre in August 1966 and it was taken over by the arthouse Gala Films company as their 'flagship’ cinema. A Royal Gala performance was held in early-March 1967 for “The Taming of the Shrew”, attended by the Duke & Duchess of Kent. The film had recently been selected as the Royal Film Performance film at the Odeon Leicester Square. Gala Films operated the Royalty Cinema for a while and it eventually reverted back to live theatre use.

Again hit shows were difficult to programme into this off-West End location and spectacular ‘nude follies’ style shows produced by Paul Raymond and ‘drag’ shows such as “Birds of a Feather” starring Larry Grayson didn’t find a big audience. There was a successful run of the hit “Oh Calcutta” which had transfered from the Roundhouse, Camden Town on 30th September 1970, running until 27th January 1974 when it tranfered to the Duchess Theatre. The Royalty Theatre has had only one other real smash hit, the Broadway musical “Bubbling Brown Sugar” which began a long run in 1977, but for most of the next 20 years the theatre was ‘dark’ more than it was open. It became a TV studio in 1981 and was later taken over by the nearby London School of Economics as a lecture theatre.

In about 1999 the Royalty Theatre was taken over by Sadlers Wells Theatre as a temporary home to their dance theatre (while their own theatre in Islington, north London was being re-built) and the location of the Royalty Theatre closer to the West End has proved successful, in so much that they now have a long lease on the building and have re-named it the Peacock Theatre, staging seasons of productions of dance companies from around the world.

“The Golden Head” was the first new Cinerama single lens (ie 70mm) production made by Cinerama itself, in collaboration with Hungarofilms, this was originally announced as being titled “Milly Goes To Budapest”. It played at the Royalty with the Cinerama short “Fortress of Peace”.

More information on “The Golden Head” can be found at http://cinerama.topcities.com/goldenhead.htm

I enjoyed seeing “2001: A Space Odyssey” in 70mm here at the Royalty during the summer of 1969. It had a huge screen and a good sound system for a cinema in the basement of a building. We had to take a taxi to the address on Portugal Street, as we had no idea where it was. Actually, it is right off the Kingsway below High Holborn. I hope it will continue to be successful as a live stage for Sadler’s Wells and the Peacock Theater.

A couple of 1988 pictures of the Royalty Theatre here:–

I saw The Golden Head at the Theatre Royal Cinerama in Manchester. It was an ‘okay’ movie with some good action sequences but was never shown in USA until recently.

I remember seeing Ben Hur here . Wow. What a movie and a fantastic cinema. Unusual to go downstairs to a basement but a magnicent setting for what I consider the greatest movie ever made. I heard about this actor who I recall was in The Ten Commandments who was in it. Charlton Heston did everything right in being the main character Judah Ben Hur. I remember the round of applause that broke out in the audience in the chariot race sequence where Ben Hur’s chariot leaps over the wreck of two others. ( In reality the second unit directors son, Joe Cannut performed the fist part of the leap and through careful editing Heston is shown crawling back into the chariot ( still a tricky manoeuvre for an actor ) ) Fond memories for me.

Does anyone have a photo or two they could post when the Royalty was a Cinerama Theatre . I would also like to see how big the screen was?