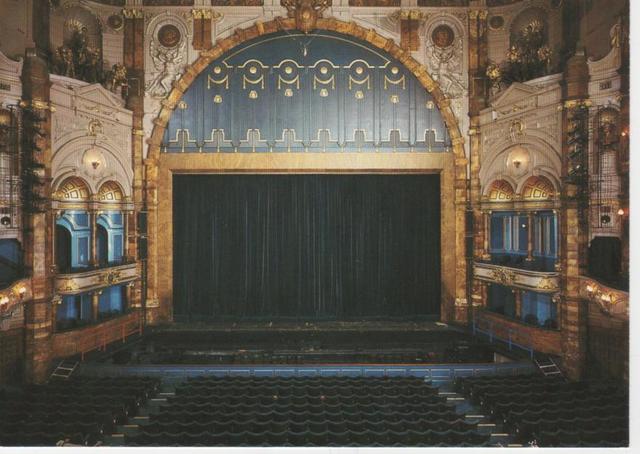 Opened on 24th December 1904 as the London Coliseum Theatre of Varieties with a variety programme featuring the ‘The American Sisters Meredith’ singing an Indian love-song “Oowana”, ‘Madge Lessing’ singing “Goodbye Little Girl, Goodbye” supported by troops of Highland soldiers and a band of pipers & drummers, ‘Eugene Stratton’ (the Chocolate Coloured Coon) singing “Lily of Laguna” against a spectacular backdrop depicting the Rio Grande and backed up by a spectacular chorus, with a finale depicting ‘The Derby’ sketch in which real horses and jockeys raced against the revolving stage to spectacular effect. It was built for Sir Oswald Stoll and designed by famed theatre architect Frank Matcham. It was the largest and most luxurious ‘family’ variety theatre in London. Seating was in three tiers. orchestra stalls, dress circle, grand tier and balcony. It was the only theatre in Europe that provided lifts (elevators) taking patrons to the upper parts of the theatre. The proscenium is 50ft wide and the stage 41ft deep. The Coliseum Theatre was the first theatre in England to have a triple revolve installed on its stage which could revolve at a speed of over 20 miles per hour!. There were refreshment and tea rooms on all levels. Films were included in part of the variety programme from 1905 when it was equipped with the American Bioscope. In 1905 a Revue starring a 20 years old Billie Burke was staged that had a cast of 300. The theatre closed in June 1906, and didn’t reopen until 16th December 1907.

On the 11th October 1926 the premiere of “Lady Windermere’s Fan” starring Ronald Colman was held at the Coliseum Theatre of Varieties. It was a silent film, produced by Warner Bros. and Harry Warner travelled from the USA to attend the premiere. On 21st March 1931 the Coliseum closed as a variety theatre and two weeks later on 4th April 1931 re-opened as a musical-comedy house with a production of “White Horse Inn” which ran for 651 performances.

The Coliseum Theatre became a full time cinema from 6th March 1933 and a ‘straight’ Compton organ was installed. On 17th April 1933 it played the UK premiere run of “King Kong” which ran until 23rd July 1933. Katherine Hepburn in “Morning Glory” was another film to play at the theatre. The controversial film “Damaged Lives” about venereal disease played from 19th August 1933. Films continued, and despite its huge seating capacity, in late-September 1940 it became a newsreel theatre.

Variety shows were then reintroduced until after the end of World War II. From 1947 it staged big American musicals such as “Annie Get Your Gun” starring Dolores Gray (which ran for three years). Following this was the play “Mister Roberts” starring Tyrone Power, “Kiss Me Kate”, “Call Me Madam”, “Can-Can”, “Guys and Dolls”, “The Pajama Game”, “Damn Yankees”, “Bells Are Ringing” and “Most Happy Fella”.

From 6th June 1961 it was leased to Loew’s and screened “Gone With the Wind”. “King of Kings” played from 15th November 1961 and premiere runs of other MGM films followed “The Password is Courage”, “Two Weeks in Another Town”, Bob Hope in “Bachelor in Paradise” and there was a revival of the Alfred Hitchcock classic “Rope”. Loew’s lease ended on 19th May 1963.

From 16th July 1963 it became the second of London’s four Cinerama theatres, first showing the 3-strip version of “The Wonderful World of the Brothers Grimm” which played for the first 5 months on the largest sized screen in London, the deeply curved 80ft wide, 30ft tall screen. Then from 2nd December 1963 70mm single strip film was shown beginning with “It’s A Mad, Mad, Mad, Mad World. Next came John Wayne in "The Magnificent Showman” from 16th July 1964 until 10th January 1965. Other 70mm films followed including some foreign made ones, then on 14th October 1965 Tony Curtis in “The Great Race” played for 4 months. In April 1966 3-strip Cinerama returned with “Cinerama’s Russian Adventure”. “The Bible…In the Beginning” was screened in D-150 from 6th October 1966 until 3rd June 1967. This was followed by “The Young Girls of Rochefort” in 70mm and several months of revivals and foreign films. “Grand Prix” which was transferred from the Casino Theatre in November 1967 was its next presentation. This was followed by a 70mm blown-up version of Elizabeth Taylor in “The Comedians” and a 70mm revival of Mike Todd’s “Around the World in 80 Days” which opened on 21st March 1968, and was the final film to be shown here, closing on 22nd May 1968.

The theatre was then purchased by the English National Opera company, who produce opera, sung in English, and re-opened 21st August 1968 with “Don Giovanni”. In 2004, work was completed on a total restoration of the theatre. During summer months when the opera company are not performing, the London Coliseum stages musicals, ballet, and other popular live shows.

The London Coliseum is designated a Grade II* Listed building by English Heritage.

I saw the late June Bronhill on stage in “The Merry Widow” at the London Coliseum in Sept. 1959. What a beautiful, glamourous, huge theatre. It must have made a great Cinerama house. I have attended several ENO performances there over the years. A wonderful theatre, even the outside walls are interesting— the facade, for sure; plus the north sidewall, and the rear stage wall. An outstanding theatre.

Two views of the London Coliseum auditorium and proscenium, taken before the recent 2004 refurbishment. (When a Cinerama theatre, the screen extended in-front of the eight stage boxes):
View link
View link

Ken do you have any photos of The Astoria Cinerama Screen? I see plenty of info on the cinema itself, and early pics of the auditorium, but nothing on the Cinerama/todd AO days? thanks

Ken Roe, What memories you stirred in me, I can remember seeing all the Cinerama films you mentioned. Do you by any chance have any photos or info on the travelling Cinerama theatre that toured the UK in the mid 1960’s?

There is some information about this traveling Cinerama theatre here.

A long shot. I had the honour of working for the ENO in the Box Office at the Coliseum in the mid ‘70’s. My name is John and I was on a working holiday visa from Australia when I was lucky enough to secure this dream job. My manager at this time – who I regretfully cannot recall his name – offered to approach Lord Harwood (ENO)to intercept on my behalf for a visa extension. Long story short, family commitments, un-requited love affair (sob) and sub standard accommodation saw me throw in the towel and return to Australia. Would love to contact anyone who may remember me from this time. I was sometimes called “Wombat” or “Possum” (no PC in those days!)and had to be reminded time and again that there was no “H” in reference to “La Belle Helene”.