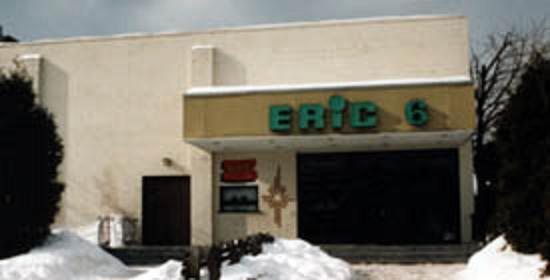 Opened as the Eric Twin in June 1975. It was expanded to 4-screens in June 1980. In 1983, an additional two screens were added. Renovation was carried out in 2004, new booths and front ends, all DTS houses. Multi-format digital presentation for events and festivals.

This was in vain, as the Marquis Theatre was closed in February 2007, and plans were approved to demolish and build condos on the site. It was demolished in 2012.

According to the Marquis' website, the theatre appears to be closed. The schedule lists “last shows” for Friday, Jan. 13 and thanks people for their patronage.

As it turns out, the condos are not going to be built on the Marquis theater site; instead it will be used to build a bus station/parking garage, and apparently a high school sports hall of fame will be part of it as well. A press release can be read here:View link

An early report on plans for this theater in Boxoffice of September 3, 1973, said that it was to be a twin with each auditorium having 500 seats. The twins were to be called the Duke and the Duchess. The theater was to be operated by the Sameric Theatre Corporation of Philadelphia.

By late 1974 Boxoffice was reporting that construction on the project had not yet begun due to disputes with the city over parking requirements. The house finally opened as the Eric Twin in June, 1975, according to a later Boxoffice item.

The September 18, 1978, issue of Boxoffice said that two additional screens would be added to the Eric Easton Twin. The original auditoriums, it said, seated 665 and 352, and the new auditoriums would seat 364 and 378. The project was to be completed before Christmas that year, but an August, 1983, Boxoffice item about the planned expansion of the house to six screens said the the expansion to four screens had been completed in June, 1980.

The 1983 item said that the fifth and sixth auditoriums of the Eric 6 would have 350 and 434 seats respectively. This would have brought the total seating capacity to 2,532. I haven’t found the exact opening date for the last two screens, or confirmation of their seating capacity, but the city allowed the fifth and sixth screens to operate for thirty days in October, 1983, according to that month’s issue of Boxoffice. A final permit to operate would be contingent on the developers completing work on sidewalks, parking facilities, and some interior work on the complex.

The last mention I’ve found of the Easton Eric Six in Boxoffice was a report in September, 1988, about a taxicab that had jumped the curb and crashed into the lobby. I haven’t found either the Marquis or the Cinema Paradiso mentioned in Boxoffice at all.

After four plus years vacant, the Marquis has now been demolished.

I opened the Eric Twin Theatre in June of 1975 for Sameric Theatres. One of our 1st movies was “Jaws”. I left in 1979 because I was promoted to sound & projection tech. for the Eric chain. I came back in 1983 when the theatre became a 6 plex, & left in 1986 when United Artists Theatres took over. I have a lot of wonderful memories of that theatre and pictures. I’ll download them soon.