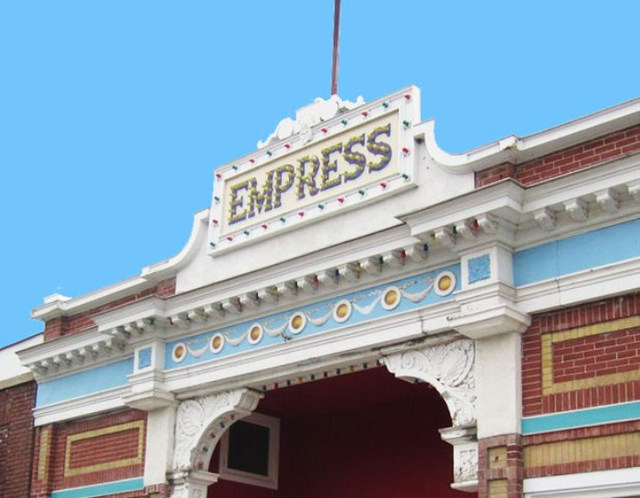 The Empress is one of two old theaters in historic downtown Magna.

When the theater was first built, though it may be hard to believe, the town of Magna was a probably just a small, isolated town on the far west side of the Salt Lake valley.

The Empress was closed for a very long time, but the facade of the theater remained in amazing shape. It re-opened as a 180 seat live performance theatre in October 2006. The theater’s original parking lot has been turned into a park.

THIS THEATER NEEDS TO BE CHANGED TO OPEN.It has been restored,first by one man’s effort,then finished by a community effort.On 11-10-06,it reopened with a production.The DESERET MORNING NEWS article of 12-1 gives a good account,including pictures.This effort goes along with a real effort to turn the old downtown of Magna into something.

I got this off Grant Smith’s utahtheaters site.Any cinema fan will find good stuff there.

The Empress is now open as a live performance venue, and is currently mounting its seventh major production (8/9/2007). The building first opened as a burlesque serving miners and mill workers in the Magna area in 1916. It later converted to silent films and still later to talkies. It closed ca. 1955. The theatre was heavily damaged by a fire; apparently being right next to the fire station didn’t help. A portion of the roof had collapsed, and the building had been condemned by Salt Lake County.

A local actor, Leo Ware, made the structural repairs and modifications necessary to save it from the wrecking ball, and then worked for 17 years to restore the building, much of the work by hand, including excavating the basement. The Oquirrh (pronounced Oak-ur) Hills Performing Arts Alliance (OHPAA) took over from Leo when he was in an accident and could no longer work on the building. Restoration and rennovation continues. OHPAA is a 501©(3) tax exempt non-profit, and accepts donations toward continued restoration.

Because of the necessary stuctual modifications, the seating is now ¾ round, but the interior of the building is charming. The eastwall is native brick, the west wall is brick with some remaining plaster (when it isn’t covered with scenery for a play). the north wall is brick with a portion of the original movie screen still visible above the last row of seats. A “catwalk” stretches the entire length of the house north to south to allow the crew to adjust lights, etc. Some of the original roof trusses are still in place, and one can see how they were charred in the fire.

The current auditorium seats about 180 in new seats, but some of the old seats made a comeback as part of the set for our current production of “Bye Bye Birdie.” There are other seats stored in the basement of a nearby building. The parking lot next door to the east used to be Salt Lake County Fire Station #2. The building to the west was Magna Lumber and Hardware, and is as old as the Empress. We’re currently using it as a set shop and for storage. Across the street is the former home of Dyches' Rexall Drug, which stared its life as one of the first “Zions Co-operative Merchantile Institution” (ZCMI) stores, America’s first department store.

Please visit the theatre’s website at www.empresstheatre.com, then come visit the theater itself and see a show. If we’re not too busy, and you ask nicely, we might even give you a tour.