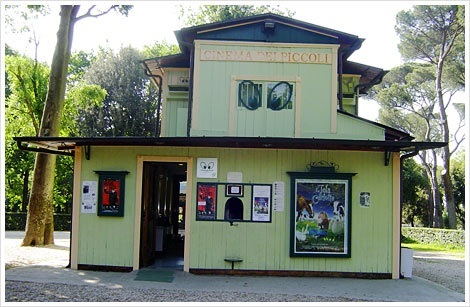 A small cinema showing recent movies suitable for children (the name translates as “Kids' Cinema”). It was originally opened in 1934 as the Cinema Topolino (named after Mickey Mouse) and was built by Alfredo Annibali.

It is located in a magical setting of Rome’s Villa Borghese park amid the pine trees, and you might expect to see ‘Bambi’ milling about the ticket window area.

Originally the cinema used a bed sheet as a screen and a Pathe-Baby 9.5mm projector. It was restored in 1991 and now has air conditioning, stereo sound and can now screen films on two Veronese projectors or a single 16mm Bauer projector.

The Cinema dei Piccoli is listed in the Guinness Book of Records.