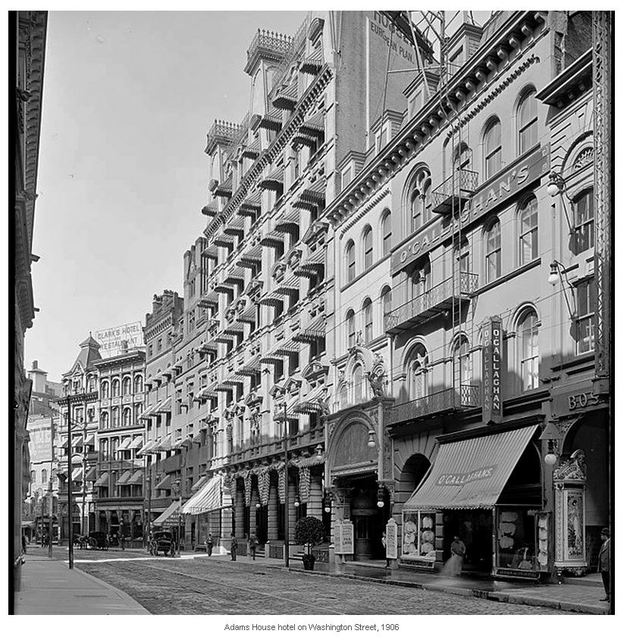 Although it was primarily a vaudeville house during Keith-Albee’s ownership, Thomas Edison demonstrated his new Vitascope movie projector here on May 18, 1896. This was the first projection of a movie anywhere in Boston.

After the Keith-Albee partnership replaced their Boston Theatre with the B.F Keith Memorial Theatre in 1928, they sold this no longer “New” theatre to the Shubert organization. It reopened on April 1, 1929, as the Apollo Theatre, but soon changed its name to the Lyric Theatre. It later became a movie house, first called the Normandie Theatre and then the Laffmovie Theatre.

It was demolished in the early-1950’s and for many years its former site stood empty as a parking lot. In 2004, much of that parking lot became a stage extension and loading docks for the Opera House (the former B.F. Keith Memorial Theatre).

The former entrance at 547 Washington Street still stands and is now a retail store.

A Boxoffice Magazine item from September 3, 1949, reports the change in policy of the Laffmovie Theatre to art house programming. It states the new name as Artmovie. View link

The time-line or chronology in the back of Donald King’s Boston theatres book also states that the name was changed to “Art-Movie” in 1949. This policy did not last long. He says that in 1950 the name was changed again, to “Mirth Movie”. I know that in 1950 it was presenting comedy shorts; it was known as the “Laff Movie” among my junior highschool/ middle school friends. I wish I had gone into it, I had the opportunity many times. I had friends who went to the comedy movies/cartoons there often.

I read the Sept 3, 1949 BoxOffice Magazine article, as posted above by Gerry DeLuca. As usual, there are some errors in it. It was not the Laffmovie, but the adjacent Bijou which was a very early electric-powered theater. I think also that the second balcony at the Laffmovie was closed off rather than “removed” to reduce the seating capacity to 1,200. The Mgr, Ray Daugaweet, was a friend of Donald King’s and lived into recent years.

Here is a black and white nocturnal photo of Tremont Street, with Keith’s Theatre at left. It’s from the November, 1906, issue of a trade journal called The Illuminating Engineer.

What a great night shot! Especially in view of the date.

In the street directory section of the 1918 Boston Register and Business Directory, Keith’s Theatre is listed at 547 Washington Street. It’s also listed at 163 Tremont Street, east side. Just north of its entrance, at 162 Tremont (all numbers were only on the east side of this section of Tremont St. because the Boston Common was on the west side) was the entrance to the “Bijou Arcade Building”. It had 3 businesses on the ground floor, and 4 upstairs including the Boston branch of the United Booking Office, the big vaudeville talent exchange. Why did they call it the “Bijou Arcade” when it really was “Keith Arcade”?? Perhaps the Keith management did not want its name on it. I know it was possible to access the Bijou Theatre from this entrance once one got across Mason St. and into the north side of Keith’s Theatre. (both theaters were under Keith management).

Great piece of history to the theatre I have an old copper fire extinguisher from this building and was wondering if anyone knew would there be much value to it given the history of this building??appreciate any info you guys might have