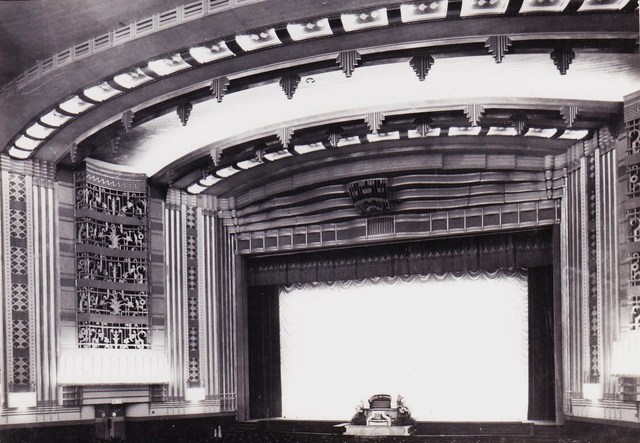 Built for and originally operated by the County Cinemas chain, this opened as the Ritz Cinema. Local architect Albert J. Thraves was also brought in by the main architects Verity & Beverley.

The main facade on busy Angel Row was narrow and gave no indication to the size of the vast auditorium that lay behind it. The Ritz Cinema was fully equipped with a large stage, a Conacher 4Manual/22Rank theatre organ which was designed by organist Reginald Foort (who opened the instrument) and a large cafe/restaurant. The opening film on 4th December 1933 was “The Private Lives of Henry VIII” starring Charles Laughton.

Odeon Theatres Ltd. gained a controlling interest in County Cinemas from 1935 and took full control in 1939, but the Ritz Cinema retained its name until 1944 when it was re-named Odeon.

The Conacher organ was last used during the run of the Todd A.O. production of “South Pacific” and was removed from the theatre in 1964 and split up. The stage was used less often in later years, but did get a short term re-use in the early-1960’s when pop groups such as The Beatles played in concerts to packed houses in the theatre.

The original auditorium was destroyed in 1964 when the Odeon became the first cinema in the United Kingdom to be split into a twin screen operation. The architectural firm Harry W. Weedon Partnership were responsible for the conversion, with Trevor Stone & Mavis Stone the interior design consultants. It re-opened on 12th July 1965 with two modern curtain walled auditoriums. The upper Odeon 1 in the former circle had 924 seats and was designed as a showcase for roadshow presentations and opened with “The Sound of Music”. The Odeon 2 screen in the former orchestra stalls level had 1,450 seats and played regular releases, opening with “Mary Poppins”.

The Odeon 1-6 closed on 26th January 2001 and stood unused until September 2012, when demolition commenced. A hotel, apartments, shops and a car park are planned for the site.

I thought it would be of intrest to inform you that plans have been improved for demolition of the building and building of a 3-11 storey office building.

The article is here, but it’s a subscription site. I think the bit that’s shown explains it all.

The Odeon Twin was the subject of an article in the American trade publication Boxoffice Magazine, October 25, 1965. It says that the plans for the 1964-65 rebuilding were made by the architectural firm of Harry W. Weedon and Partners, and the interior design consultants were Trevor Stone and Mavis Stone. Among the photos accompanying the article is one of the marquee displaying the announcement “Grand Opening July 12th.”

My uncle was the doorman at the odeon in the early 60’s he wore a purple Great coat and cap with gold trim on the shoulders, he let the Beatles out of the back entrance when they played there, and got there autographs, it was to packed With fans at the front door to get there car anywhere near!! Steve notts

The bulldozers have started. The Odeon Nottingham shall shortly be no more.

After reading the overview and seeing photo’s of screen 1 & 2 it seems strange that “1” was for Roadshows yet the screen in “2” seems to be bigger “image wise”. The same can be said of the old Odeon at Bradford.I saw a photo of the opening films for Nottingham Odeon and Chitty Chitty Bang Bang was on in screen “2”, it was shot in Ultra Panavision 70mm.

Very sad to see that this has been demolished. I remember being on a behind-the-scenes tour just prior to it opening as a twin screen cinema. I was in my early teens at the time and used to see 2-3 films a week in Nottingham throughout my teens. I’ll always remember the Odeon as being shiny and new. I still remember the projection “suite” with a rotating micro-switch drum to control curtains, lights etc.

Link to some pictures.

Exactly 50 years ago this fortnight to its original broadcast on ITV television, here’s the link to a mini-video from the archive of the East and West Midlands' universities' media project regarding the then new automatic control system

The link in goodshow’s post no longer works; however the video can be viewed at: