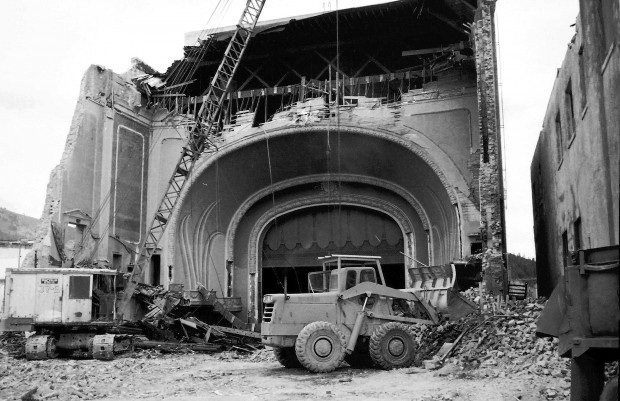 Located at Edwards Street and S. Park Avenue. Opened on April 3, 1918 playing “The Show of Wonders”, the Marlow Theatre was built as a dual purpose venue for stage productions and movies.

In the 1943 edition of Film Daily Yearbook, the Marlow Theatre is listed as being under the management of Fox Intermountain Theaters Inc. In 1949 the theatre underwent an $85,000 re-modelling, reopening on October 12, 1949 with Cary Grant in “I Was a Male War Bride”.

Highlights from its history are the visit of John F. Kennedy in the summer of 1960 who was seeking support of the Montana State Democratic Convention which met in the theatre. In June 1961, the world premiere of the “The Naked Edge”, Gary Cooper’s last film was held at the Marlow Theatre. Cooper had died from cancer in May 1961 and he was being honoured in his local town where he once had worked as a cartoonist on the Independent Record newspaper prior to going to Hollywood.

The Marlow Theatre was demolished in May 1972 for the extension of South Park Avenue.

Here is part of a September 1941 article in the Helena Independent:

Manager Jack Edwards of the Marlow Theater and Frank Pratt of the Rio Theater announce the opening today of the Fox-Intermountain theaters “Let’s Go to a Movie” month. Both the Marlow and Rio theaters will participate actively in this campaign.

The “Lets Go to a Movie” month will be far more significant to the community than the usual “Greater Show Season,” Edwards said. “We are all aware of the unique place the motion picture theater holds in the community, and in this campaign we are making sure the theaters live up to their responsibility.”

The “Let’s Go to a Movie” month was set to begin Sept. 15, this year, because our finest pictures will be released during the next 45 days. Among the exceptional pictures coming to the Marlow theater during this period are, “Hold That Ghost,” with Bud Abbott and Lou Costello, “Sun Valley Serenade,” with Sonja Henie, John Payne and Glenn Miller and his orchestra, “Tom, Dick and Harry,” with Ginger Rogers, “Belle Starr” in technicolor and starring Randolph Scott and Gene Tierney, “Dive Bomber,” with Errol Flynn and Fred MacMurray, “Dr. Jekyll and Mr. Hyde,” with Spencer Tracy, “When Ladies Meet,” with Joan Crawford and Robert Taylor, “Lady Be Good,” with Eleanor Powell, Ann Sothern and Robert Young, “A Yank in the R.A.F.,” with Tyrone Power and Betty Grable, “Aloma of the South Seas” in technicolor and starring Dorothy Lamour and Jon Hall, “Sergeant York,” with Gary Cooper, “Parachute Battalion,” with Robert Preston and Nancy Kelly, “Wild Geese Calling,” with Henry Fonda and Joan Bennett, “Navy Blues,” with Ann Sheridan, Jack Oakie, Martha Raye and Jack Haley, and the picture the whole world is waiting to see, “Citizen Kane,” with Orson Welles.

As Edwards Street no longer exists, Google Maps is incapable of finding the location. The nearest you can get to an address for this theater on a vanished lot is Broadway Street at Park Avenue. If you look east along Broadway from Park, you’re looking directly across the spot where the Marlow stood. The west side wall of its stage house would have crossed Broadway just a few feet south of the current intersection. This web page (the same one ken mc linked to earlier) has a map showing its location. The section on the Marlow begins below two pictures of the Antlers Theatre.

Link about the Marlow with many photos. Copy & paste to view.

One of the newspaper articles displayed at the above link says that the architect of the Marlow Theatre was Henderson Ryan. The Marlow was one of several theaters built around this time that featured Ryan’s inclined ramp system for access to the balcony and mezzanine. 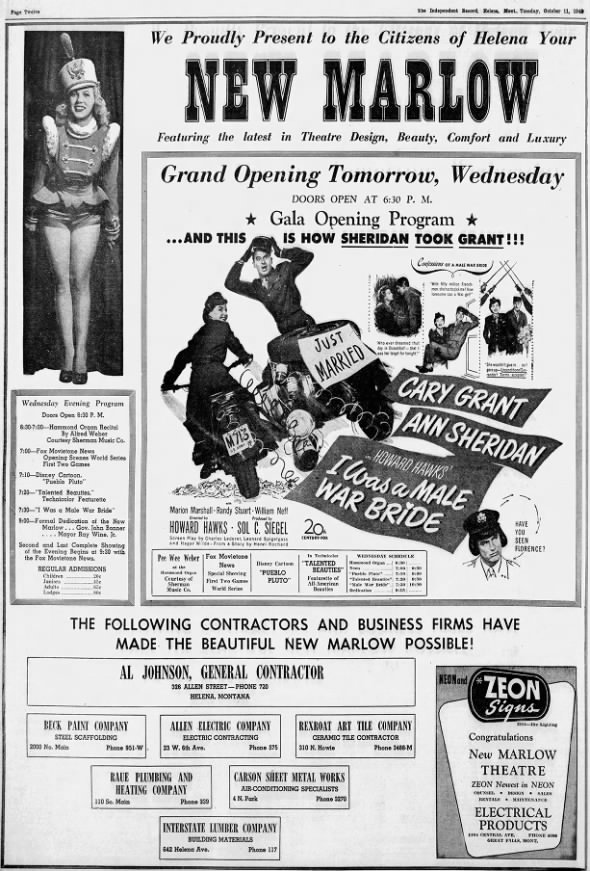 This page about the world premier of Warner Brothers movie “Montana” at the Marlow Theatre on January 10, 1950, appeared in the January 21 issue of Boxoffice.

In July of 1970, Urban Renewal purchased the Marlow Theatre from Paul Holenstein’s Diversified Realty, Inc. of Butte for $97,900. Diversified Realty was formed in 1963 as a consequence of the bankruptcy and reorganization of Holenstein’s Prudential Diversified Services. Holenstein had numerous interests in Montana, and operated the Placer Hotel in Helena 1961-1965. He died in 1974.

March 1942 John Vachon photo with a street banner for the Marlow Theatre. Click on “View full size” for greater detail.