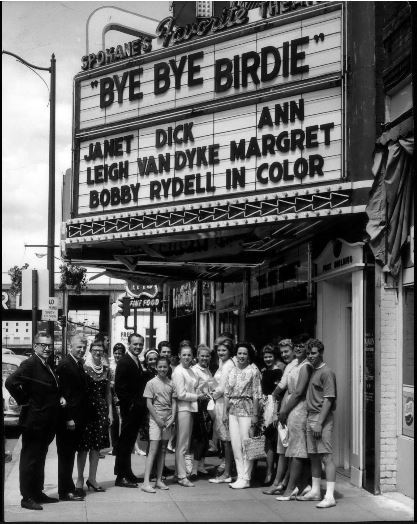 Opened as the American Theatre on 25th December 1910 with a three-act play “The Walls of Jericho”, it was a project for the Shubert Bros., but actually opened under the Klaw-Erlanger banner.

The architect was E.W. Houghton, a Seattle architect who first employed famed theatre architect B. Marcus Priteca when he first came to Seattle from Scotland. Seating was provided in orchestra, circle and balcony levels in an auditorium that was an exact copy of the Maxine Elliot Theatre in New York City, except for the difference in seating capacity (the NYC theatre had 800 seats, the Spoke one had 1,650).

Initially a playhouse, it turned to Pantages vaudeville for a year in 1918 while the new Pantages Theatre was being constructed on Howard Street. During the early-1920’s it played many operettas that were popular at the time. A Robert Morton theatre organ was installed for a short period of time but it was removed in 1928.

On February 28, 1930 it was re-named the Post Street Theatre and presented Francon and Marco Revues and motion pictures became more frequent on the programme. Many more years of a mix of vaudeville and movies eventually led to it becoming a full time movie theatre which lasted until it closed on 31st May 1972. It was later demolished.

The November 9, 1913, issue of Moving Picture World had a brief item about this house:

“The American Theater at Spokane, Wash., has been reopened with pictures, although it is announced that later it will go into a vaudeville circuit, in which the Advance Amusement Company, of Portland, Ore., is active. The lighting system has been replaced by a semi-indirect plan and the entire theater interior has been re-decorated.”