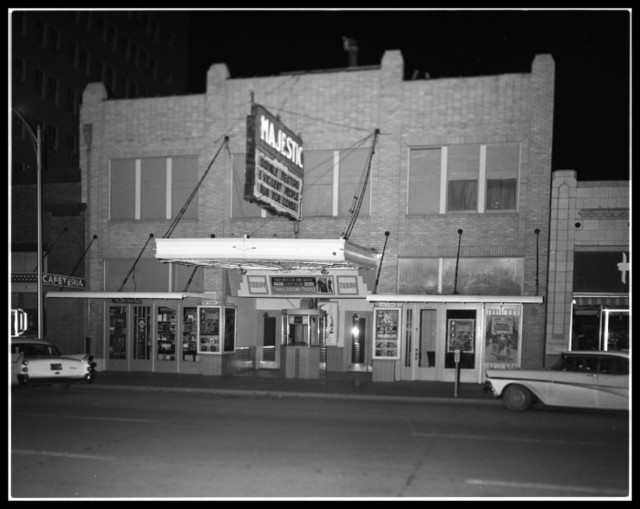 This was a fairly plain theater, a block away and across the street from the Paramount Theatre, but much more modern. Opened September 7, 1925. It was very run-down, even when I was a kid in the 1960’s.

The Majestic Theatre was also operated by Paramount Pictures Inc through their subsidiary Hoblitzelle & O'Donnell.

It is listed as operating in the Film Daily Yearbook,1941 with a seating capacity of 1,585.

A 1986 photo of the Majestic Theater in Abilene.

The Majestic Theatre was built by C.E. Fulwiler. The Majestic’s Grand opening was September 7, 1925 with Mrs. H.D. Carsner at the Wurlitzer organ, Syd Chaplin’s “Charley’s Aunt” on the screen and would be operated in its formative months by W.O. Shackelford. The opening crowd was reportedly the largest single crowd for one indoor performance ever to that date. Raleigh Dent of Dent Theatres soon acquired the theatre from Shackleford. Dent would also be a short-term operator but would make history by playing the first talkies ever seen/heard in Abilene. It was a big event taking place on November 5, 1928 with the film, “Uncle Tom’s Cabin.”

On December 14, 1929, to announce its new operators in the Publix Theatre Circuit which had major stockholder interest in Dent Theatres. A Publix locomotive was greeted by Abilene Mayor Thomas Hayden Jr. KFYO radio showed up at each of the new Publix-held theaters for special broadcasts starting with the Rex, then the Queen and finally the Majestic. The Depression was taking its toll both on the citizenry and the theatre circuit. Publix went into severe financial difficulty and closed the Queen and then on March 7, 1931 closed the Majestic after showing “Way for a Sailor.”

On Feb. 25, 1954, the Majestic went from being in the Interstate Theatre Circuit to the Trans Texas Circuit. On its 50th Anniversary, the theater was between its adult period and its forthcoming Spanish Language period showing “Walking Tall II" and managed by Charles Wolfe. In 1977, Basil Huckabee subleased the theater from Wolfe converted to Spanish Language films; he had done the same previously at the Crescent Drive-In and was currently operating the Marine and Berry as Spanish language houses in Fort Worth.

Saw the “Godfather” and “Towering Inferno” there in the early 70’s.

Saw Flight of the Phoenix, Earthquake and Dr. Zhivago at the Majestic. Best I remember, it was not a very nice or clean theater. It was located next to Mack Eplens downtown cafeteria and when they showed the movie Earthquake, the cafeteria shook like the theater.

I attended the Majestic often during my student years at Hardin-Simmons (1963-1967). At the time it was a “second-run” theater showing older films from recent years (The Manchurian Candidate, West Side Story) and also some lesser classics (Abbott and Costello). On at least two occasions, the management attempted to re-brand itself as an art house. I saw my first Fellini there (81/2, Juliet of the Spirits).