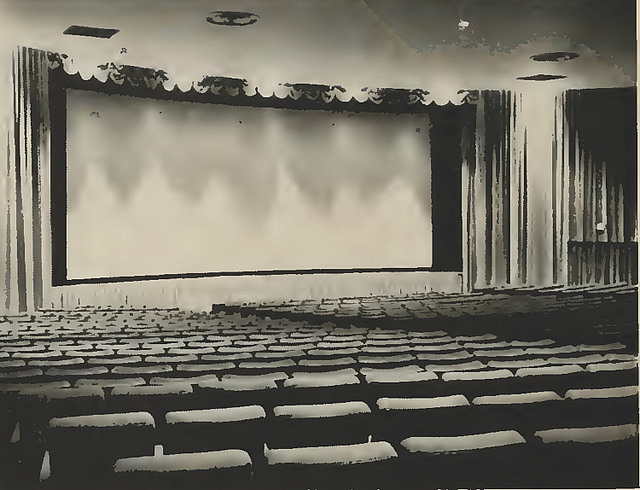 The Regency Theater, built by Plitt Theaters and opened July 19, 1972, had about 800 seats and a curved screen that was at least 60 feet wide.

The auditorium was covered with dark draperies and had two voice-of-the-theater surround speakers, one in each back corner. The local Plitt offices were located above the lobby by the projection room. Because of its location at the mouth of Parley’s Canyon, inexperienced moviegoers had a difficult and often frustrating time locating the theater.

The Regency Theater was one of the best places in Salt Lake to see a 70mm film, such as “Close Encounters” or “Alien”. When downtown Salt Lake flooded in 1983, the 70mm print of “Return of the Jedi” was temporarily moved from the Centre Theater to the Regency Theater. Showings of the restored “Lawrence of Arabia” in 70mm were so full that many couples on dates had to be split up so they could sit in separate parts of the auditorium.

Shortly after the demolition of the Centre Theater in 1989, Cineplex Odeon changed the Regency Theater into a dollar theater. Sometime in 1989 or 1990, the theater closed permanently.

The Regency Theatre was opened by ABC Intermountain Theaters in 1971. I worked there as an assistant manager in 1977. When Close Encounters played, the projectionist and a few other employees made a big silver flying saucer out of plywood and Visqueen to display on the roof, hauled it up there, and it stayed there for a few years because no one could figure out an easy way of getting it down.

The Regency was built with an undeveloped area beneath the lobby and auditorium for use as a second theater. It had doors and windows to the outside (west side) and you could look in a see a big field of large gravel rocks. If anyone asked, they were told “that’s where the other theater will be.” It never was.

Do we remember 1975? The year that “Jaws” began what was called “the summer blockbuster” movies? One can still remember the parking lot just crammed with cars of car owners filling the Regency to see Steven Spielberg’s shark movie at this famous theatre. Yes, I saw “Close Encounters” and “TRON” at the Regency. I would drive down from E. Idaho to see many movies at the Regency.

The Regency Theatre was featured in an article in the Modern Theatre section of Boxoffice Magazine, November 13, 1972. The building included second floor offices for the Salt Lake City division of ABC-Intermountain Theatres. The Technicote XR 171 screen was 22'x50'. The booth featured a 35/70mm Century projection system, and multi-channel sound was by Electro Sound.

I have many fond memories and made many friends working at the Regency Theater. I worked for Plitt for over six years starting at the Regency when I was sixteen. I remember many shows like “Midnight Express”, “Close Encounters”, “Porky’s” (We had police checking ID’s) and “Battlestar Galactica” with something like fifty rear seats removed to accommodate the large sub-woofers installed just for that movie. The whole building shook. It was amazing! We had some great midnight shows too like “The Song Remains the Same” and “Rocky Horror Picture Show.” It was a great place to work.

Allright! Led Zeppelin The Song Remains The Same. I was on the front row for this one. Also took my Nephews to see The Karate Kid here.