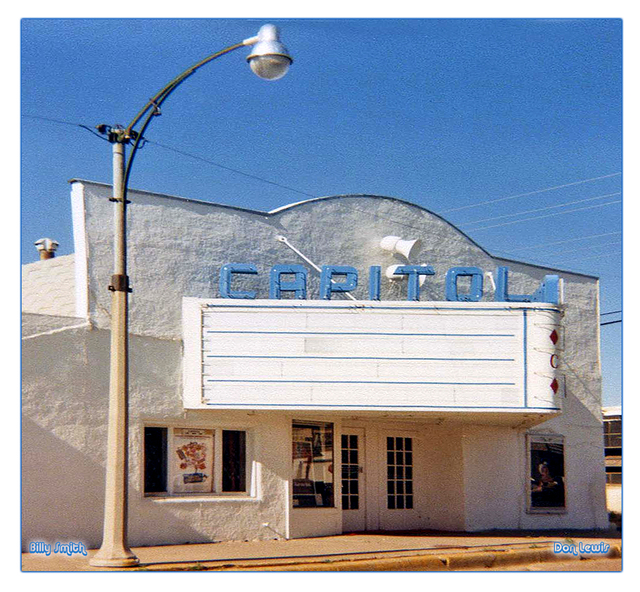 Dating from 1926, this theater reopened in 2005, after briefly being closed. The Capitol Theater is in terrific condition and is one of the highlights of visiting this part of Colorado. The theater features a blue and white neon marquee as well as a well-preserved interior. The outside is clad in painted adobe.

Just recently visited the Capitol, and it looks great! Congrats on the reopening! Springfield should be proud of this accomplishment. I’ve got new pictures, too!

Another Capitol tidbit. They serve pizza and will bring it directly to your seat. I guess that’s a Capitol tradition. How’s that for service? Actually, we just met the owners, and they’re doing a great job!

I visited the Capitol on July 10th, 2010. It is indeed a well preserved and little known gem and the above comments are certainly accurate. The interior has a general 1950s decor and a red color scheme with some beautiful, lite colored, wood paneling in the lobby (actual wood, not the cheap laminate stuff from the 1970s). The tickets are sold directly inside, where you pass through a narrow hall that serves as the box office and concession stand. At the end of that, there is a large mezzanine before you enter the auditorium. The seats in the auditorium are new-ish and very comfortable. They still do serve pizza to your seat if you want. The lower half of the auditorium walls are quite remarkable; they are covered in 1970s-era carpet samples and are extremely beautiful while adding an elegant splash color to the auditorium. These, sadly, will be removed and replaced by a more modern form of acoustic wall covering in the near future.
The booth is a very small, steel booth from the nitrate era. It contains platters and Brenkert projector. The presentation and sound were very good. There is no balcony in this theater, which dates back to at least the 1940s. It was owned and operated until the year 2000 by Ruby Ross, who closed the Capitol to run the Kar-Vu Drive In in town which she also used. The current manager is a very friendly, younger lady who although no relation to ms. Ross, has deep family roots in the theater business.

This theater is not to be missed when in Springfield!

From 2010 a photo of the Capitol Theater in Springfield.

I grew up in Springfield in the mid 80s. A quirky detail I remember from the Capitol was an old cartoon hanging in the mezzanine. It was by Stan and Jan Berenstain and was entitled “Saturday Matinee”. A Google search revealed that the cartoon was created as the cover for Collier’s Magazine in 1949. I wonder if it still hanging there.

Needs to be changed to open-the theater is alive and well. Already made the digital conversion as well so I’d say they aren’t going anywhere either…

By the way, not to be rude or go off topic but this whole “looks closed”/“appears to have closed” business that plagues Cinema Treasures (and too often, erroneously gets statuses changed) is getting old. This is a VERY important website used for dozens of different purposes by thousand of different people so accuracy really is of paramount importance-please research things before making statements. Remember, many of these theaters in sleepy little towns, especially ones with elderly owners/operators/staff/volunteers (which is often the case) appear quite stagnate while continuing to operate as usual. Additionally, these little theaters will often randomly close temporarily due to lack of pictures to show, competing school athletic events, town events, needed repairs, etc without being gone for good. Not only can these misleading comments cause problems for historians but a good deal of the general public uses this site to find theaters for various reasons-do you really want to steer potential customers/interested visitors from these struggling little venues because they falsely believe it’s closed? Be careful,please!

New pictures of the Capitol Theater in the Photos section. Wonder what sounds got piped through the two bullhorn speakers on the front of the venue?

Boxoffice, Feb. 25, 1963: “Also changing hands was John Murray’s Capitol Theatre at Springfield, which is now being operated by Ike Ross and Bernie Newman”. Newman would also buy the local drive-in a year later.