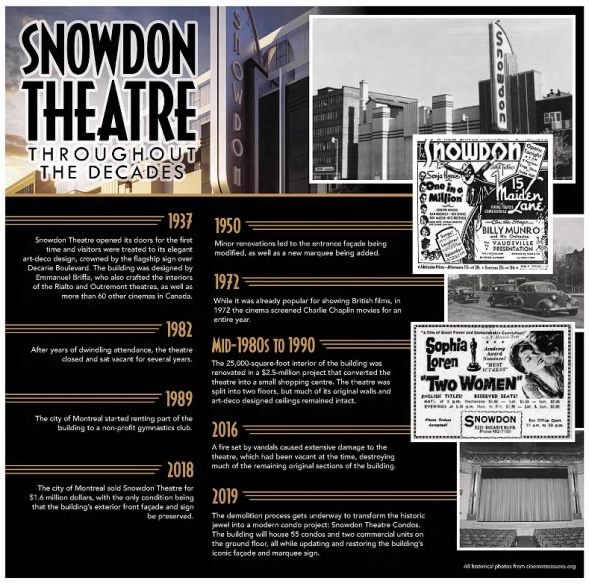 I drove by in recent weeks, looking up from the expressway below. I only had a quick glimpse, but what I managed to see—or rather what I did not see, shocked me! Behind the front wall was absolutely nothing, just empty space. The entire building has been demolished to the ground, nothing is left.

That the front facade (couple of inches) and the marquee sign were preserved are meaningless. It’s just a hallow gesture, a false mask, to (partial) obscure the ugly modern condo building going up behind it. The important part worth saving was the intricate and jaw dropping art deco from nearly century ago on the the walls and ceiling inside. Was any of it saved? This being Montreal, I think the likely answer is no.

Also worth mention, the lettering on the marquee sign was modified for petty political reasons years after the theater closed. So not even that is original. Yet another beautiful landmark in Montreal…destroyed. Sigh.

To be torn down except for the facade for a new condo project. Ad in photo section. 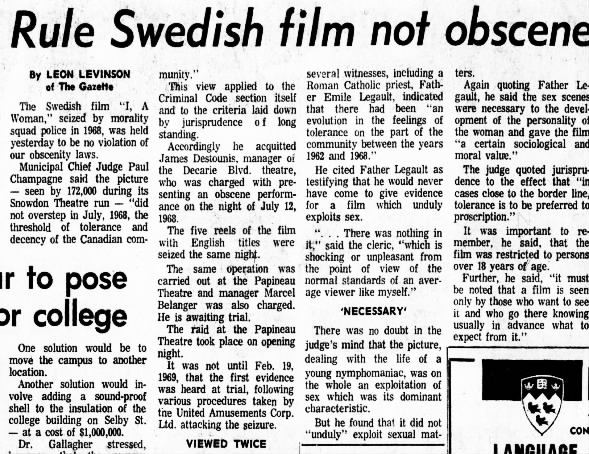 I, a Woman reopened a week later at the Fairview cinemas in Pointe Claire. another article 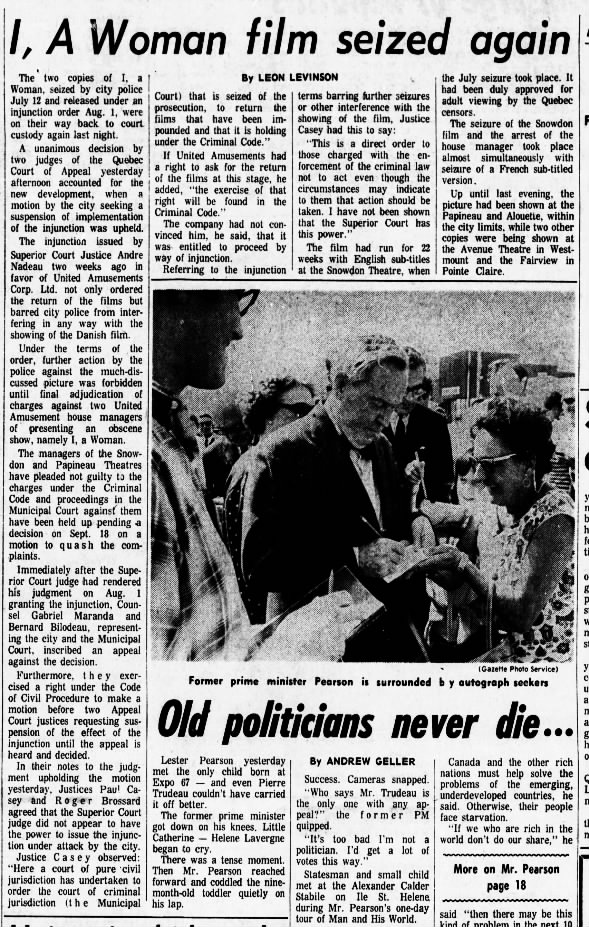 I, a Women was seized here and the Papineau theatre in 1968. Update for 2016-17: In late March 2016, vandals started a serious fire that caused major damage to the roof. The theater has been completely boarded and abandoned since.

In May 2017, the city tentatively sold the building to a condo developer, with a request they preserve the theater’s marquee sign and building facade. Nothing about saving the interior or art-deco was said (i.e. the part worth saving!). Of course there’s no guarantee any of it will be saved, it could just be outright demolished.

As of September 2017, the Snowdon theater still sits abandoned and deteriorating.

Update as of June 2014: All tenants of the building have been permanently evicted due to unsound roof conditions (leaking and rapidly deteriorating). The city of Montreal has bordered it up and refusing to carry out any repairs.

Likely it will suffer the same fate as other Montreal theaters bordered up and left to the elements. Disturbing as there is a literal treasure of art-deco on the walls and ceiling of the original theater still intact (for now).

Three pictures of the former Snowdon appear on this blog page: View link

Does anybody know what happened to Nello’s Pizza located a block down from the Snowdon Theatre??? ( approx. 1972 )

Three photos of the original interior:

A recent one of the exterior:

In 1988-89 the building was gutted and restrucutred into a large space which occupies the now 2nd floor, and several smaller units on ground level. The building was owned privately and rented out the lower units to several different retailers including a hair salon, a photocopy store, a bar and a trading card store in the basement. The larger upper space (which is the only part to retain any remnants of the old Snowdon Theatre) was rented by the City of Montreal for a semi-private gymnastics club for kids. Tired of renting, in 2003 or 2004 the city finally bought the entire building from its private owners. The establishments still remain, and children from 3 to 16 years old still practice gymanstics below a gorgeous art deco ceiling. The walls are lined with angelic sculptures which indicate where the exits once lied beneath, the area where the screen was is still clearly visible and beatifully bordered, and the projection room is now an office which overlooks the entire space from high above. Flexart Gymnastics Club still operates in the old theatre and continues to command a “wow” from visitors upon entering. You can visit their website at www.flexart.ca for a current picture that gives you a good look from the balcony area (under the “birthday parties” link).

re: “Prices that day were 25 cents and 34 cents."
Hell, I would have gone in the afternoon for only 15 or 20 cents. Were there senior discounts?

Here’s a photo I took of the Snowdon in 1989 or so. I believe it is now retail shops.
View link