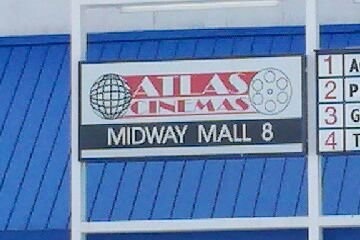 General Cinema had the Midway Mall Cinemas in the 1980s and 90s. According to Moviephone.com it is now being operated by an entity called Talbot Theatre Group (any relation to Dan Talbot of New Yorker Films and Lincoln Plaza Cinemas fame?). Prior to General Cinema, National Theatre Corp. operated a Midway Mall Cinema I & II, but it was located inside the mall. The present theatre is a perimeter building, away from the mall itself.

This theater was part of the original 55 theaters that General Cinemas closed durring the late 90’s. It was one of the very few theaters that was stripped of equipment. It was put back together a few years ago by Kenny stultz and ??? Talbot the together own the Aloma Cinema Grill in Orlando Florida.

ELYRIA â€" Beginning Friday, movie fans will once again be able to check out first-run movies in Elyria.

Crews are sprucing up the theater, which has been dark about six months, and there have been upgrades in sound, said Christopher Ross, an Atlas operations manager at another location.

Atlas Cinemas is owned by Al Saluan, who currently operates 39 all-digital screens at locations in Euclid and Mentor, Ross said. The Elyria theater is not digital; movies will be shown in film format for the time being, Ross said.

A manager has been hired and the company plans to do some additional hiring, Ross said. The company is taking applications in person at the theater. Applications can be downloaded at www.atlascinemas.net

Formerly operated first by the now-defunct General Cinemas, then by an out-of-town independent, the Midway Mall theater stopped showing films in May.

At the time, Susan Godorov, vice president of marketing for the mallâ€\s owner, Centro Properties Group, said the theater closed after owners failed to meet their lease agreement.

Centro filed a lawsuit against Midway Cinemas 8 in October 2007, claiming the theatersâ€\ owners failed to pay more than $50,000 in back rent. Centro accused the owners of not having made a payment in months.

This theater replaced the Midway Mall 2 theater which opened in 1966. It was orignally a 1-screen cinema expanded to 2-screens in 1975. The theater was closed in 1987 and was taken over and fully remodeled into a General Cinema theater in 1990, during this time the theater was expanded to an 8-screen theater. List of Owners: 1966-1975 Associated Theatres 1975-1985 National Drive-In Theatres 1985-1987 Armstrong Circuit 1990-2001 General Cinema Theatres 2008 Atlas Cinemas