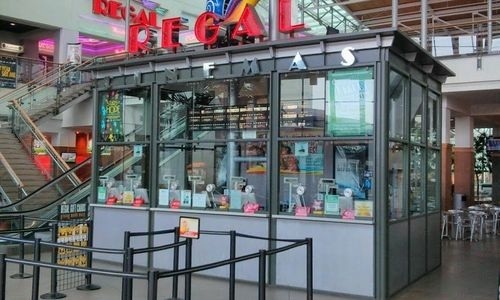 Opened April 10, 1998. This was the first of the 15+ screen Post AMC Grand Megaplexs I stepped foot in and was truly dissapointed in what I saw. There is very little to this theatre worth describing. The architect - I’m assuming there was one - put very little thought into the layout and design of the place making for a forgetable moviegoing experiance.

Let’s see, where do I begin? First, it sits on the top floor of a small two story shopping center with the box office on the first level. After purchasing your ticket you are directed to an escalator which leads up to a ticket taker and a concession stand. There is no lobby! The “theatre” is in two sections, “right” and “left”. Each section consists of eleven screens. Once in your section you are in what appears to be a long quiet narrow hallway with doors on either side that lead to the auditoriums. Most of the auditoriums have a seating capacity of about 175 with a couple of 300 seaters, the most having 354. The color scheme is ugly. Lots of lite Greens and off whites. The auditoriums themselves were unspectacular with very noticeable projection and sound problems.

Mind you, this theatre was built in the late-1990’s when these problems should be non-exsistant with the state-of-the-art digital sound and projection technology available. What a shame.

I happen to work at this theatre currently and although the design is flawed and the choice of colors are not the best, the service and dedication of the employees make it the best theatre in the east Orlando area, surpassing that of Regal Waterford Lakes 20, Regal Winter Park Village 20, and AMC Altamonte 18. The theatre was planned and built during 1996-1997 and opened in March 1998. It was supposed to be a different theatre company at first, but they withdrew and Regal took over the space as it was being built. The design and architecture was not that of Regal. The mall developer, Rouse Company, also had a say in the development of the theatre, as far as I know. It is true that the color scheme is ugly, I don’t like it myself. Lots of green, purple, and pink neon lights. There actually is a lobby once you get off the escalator with a concession stand on one side and a cafe on the opposite side. There are four large buildings on each corner of the lobby that house the auditoriums. There are 2 buildings on the southeast and southwest corners that house 2 auditoriums in each with a capacity of 450 and 350 in each building. The northeast and northwest buildings each holds 9 auditoriums varying in size between 140 and 210, most are about 175 as mentioned. There used to be side concession stands in both of these buildings, but as attendence dropped due to Waterford Lakes 20 opening 15 minutes to the south in late 2000, they replaced it with poster cases. The main lobby has a sloping 4-story high ceiling and parts of it are glass throughout. The north side of the complex is all glass and you can see outside one of the tree-lined mall entrances. Also, you should keep in mind that most of the theatre is on the second floor with retail stores and restuarants directly beneath on the first level. Because of this, it was more constrained to what they could do with the theatre.

This opened on April 10th, 1998. Grand opening ads can be found in the photo section.