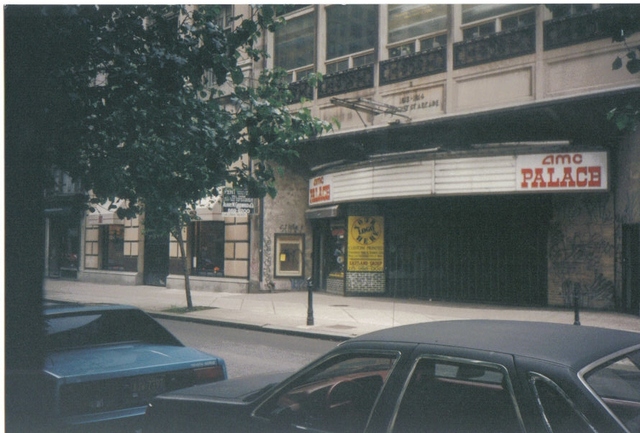 Opened on July 7, 1967 with Michael Crawford in “The Jokers”, Theatre 1812 was an independent first-run theatre of the 1960’s and 1970’s. “The Lion in Winter” was shown for 39 weeks, starting November 3, 1968, here, for its Philadelphia area first run engagement. It eventually switched to adult films.

It closed and became a meeting hall for the city teachers' union, then was leased by Budco and reopened as the Palace Theatre in November 4, 1983. When AMC acquired Budco it was said that this was the only single-screen theatre in their chain. It closed for good in November 1992.

From 1974 to when the theatre closed in 1978, its film attractions were “Over 21” only. After the Federation of Teachers used the theatre, Budco reopened it on Friday, Nov. 4, 1983 as the Budco Palace Theatre. However, it closed permanently in Nov. 1992.

I remember a large curved marquee. I visited the booth when they were showing “The Stewardesses” in single strip 3D. The Peerless Magnarcs had the new Diachroic reflectors. It was around 1971. I lived and breathed projectors back then. It’s still in my blood.

Yes, large curved marquee.
Photo by Dennis Zimmerman with Lion in Winter on marquee:
View link
Thanks to Dennis for taking the photo & allowing it to be posted.

The first X rated film shown was the exclusive Philly showing of Deep Throat in 1972.
As I recall lines were around the block.

Closed but not demolished! The center of the façade still reads — 1812-1814 CHESTNUT ST. ARCADE — the same as it did when the building opened in 1924. Boyds, the Philadelphia clothier that now calls the building home, did a beautiful job of restoration! By the way, the building was originally designed by Gravell & Hall, (William Henry Gravell, Arthur W. Hall), a Philadelphia engineering partnership.

The street level of the theater was Above the center window and above BOYDS, the facade still proclaims 1812-1814 CHESTNUT ST. ARCADE.

This opened on November 4, 1983, as Palace. Its grand opening ad can be found in the photo section.