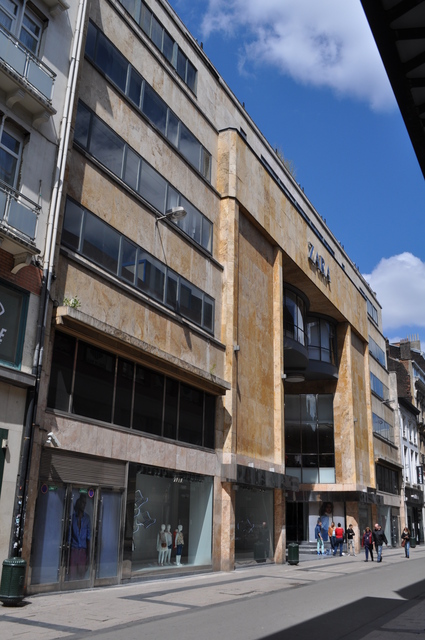 Opened on 27th October 1932 with a screening of the French film “Fanny” directed by Marcel Pagnol, the Cinema Metropole was the most spectacular cinema ever to have operated in Brussels. The architect was Adrien Blomme who created a beautiful streamline cinema building which had a hotel built on top.

The facade had four storeys of concave and convex glazing, behind which is a foyer of the same height. Internally there was much use of marble, travertine and walnut paneling. Inside the auditorium seating was in the orchestra, mezzanine and balcony levels, with a projection booth located at the rear of the mezzanine to give an almost straight throw onto the screen.

Over the proscenium was a relief panel by the sculptor Ossip Zadkine, which possibly masked the organ pipes.

Sadly this magnificent cinema was divided into three screens in 1971 and then a fourth screen was added in 1989. In 1993 it closed and as it is located in a prime position on one of the main shopping streets in the centre of Brussels, it became a prime candidate for conversion to retail use. The hotel that had originally been built above the theatre extended itself into the upper areas of the building and a shopping mall was inserted into the street level. Now only the facade and outer walls remain, the interior is totally gone.

A small correction to the name of the architect, it was Adrien Blomme. Blomme(1878-1940) had already done other work for the Belgian brewing family Wielemans-Ceuppens, who had financial interests in the earlier Hotel Metropole (which is still extant) and in the new Cinema.

From the very beginning, some of the basement function rooms of the Hotel were located under the cinema. The Zadkine panel has been reported to remain, invisible, on the premises but the public spaces of the interior retain no features whatever.

I stayed at the hotel in 2001, knowing that it had formerly this huge movie palace. The facade doesn’t look anymore like a former theater. I’d love to see vintage photos of exterior and especially interior!

It now houses a Zara women’s appareal store. I think the facade is still gorgeous. Will post some photos (panorama) soon.

This page has a vintage picture of the faÃ§ade of the Metropole :
http://www.tbx.be/fr/VIB/183/app.rvb

Does anybody have a picture of the Zadkine panel placed over the sceen?
Please send to :
thank you
Richard