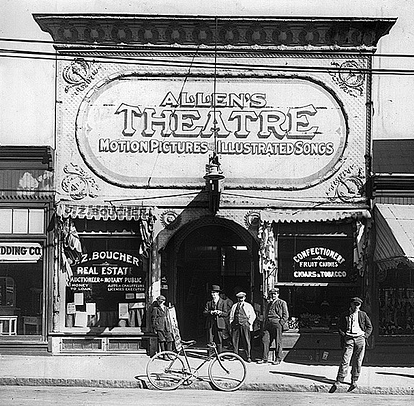 From “New Bedford, A Pictorial History” by Judith A. Boss and Joseph D. Thomas: “One of the feature’s of Allen’s Theatre that made it a favorite with the neighborhood children was its weekly serial cowboy movies. The theater was destroyed by fire in 1940.”

Images of the Allen’s Theatre fire in 1940 as well as photos of other New Bedford theatres, can be found in this excellent set:
View link
Allen’s Theatre was on Acushnet Avenue.

There is an Allen Theatre listed for New Bedford in the 1927 Film Daily Yearbook, with 700 seats, open daily.

Alan, that Newport theatre might have been the Strand, now known and listed as the Jane Pickens Theatre.

Alan, “Across the street” but up Broadway was the Paramount, now an apartment building. Next to the Strand by a couple of doors is the Opera House. Diagonally behind the Strand and the Opera House, on Thames Street, was the Colonial, now an Express store. There were no others in that area unless you go back to around 1907. My guess is that you are thinking of the Paramount. The Paramount is listed on Cinema Treasures.

My father, Gilbert Hemenway, was a projectionist at many of the New Bedford area theaters, starting at the Allen Theater where he and his brother George were trained by their brother Floyd to be projectionists. In those days you had to study electronics and get a license to be a projectionist. Union contracts specified a 2-man booth, as the projection rooms were called. My father started as a ticket-taker and usher and thats how my mother met him. The popular photo of the Allen Theater, with the bicycle in front has one of the persons to be an uncle of mine, Richard or Joseph Casey, who died at age 21. I was born in 1943. I grew up in the booth. I only remember the theaters my worked from 1948ish to 1956, then we went to Los Angeles for other work because TV was killing my fathers profession.

In Fall River it was the Plaza and the Embassy – and there was the Strand (now the Jane Pickens)in Newport. In New Bedford they were the Capitol, Empire, New Bedford, Orpheum, Dartmouth Drive-In, and Fairhaven Drive-In. In about 1948 when I was about 5 year old, my mother and I would go to the Dartmouth Drive-In in our Chevy Coupe and I would sleep on the shelf in the back. Before I was born my father worked other theaters including the Keith in North Fairhaven and I think the Baily square.

Yes, it was the Strand/Jane Pickens. I visited it last year when I went back east. (I chanced to meet the current owner.)

I would like to find the book by Arthur John Gartaganis “The History of Movie Houses in the Greater New Bedford Area of Massachusetts During the 20th Century”. It was self published by the author; 143 pages. (He is 86 years old this year.) So far, I can’t find him nor a copy of the book to purchase. There is a copy in the Millicent Library in Fairhaven.

1514 Acushnet Ave was the address

I just recently found out that this theater was owned by my Great Grandfather George Allen. What is even more interesting to me is that it was such a popular theater. I would love to hear more about it.